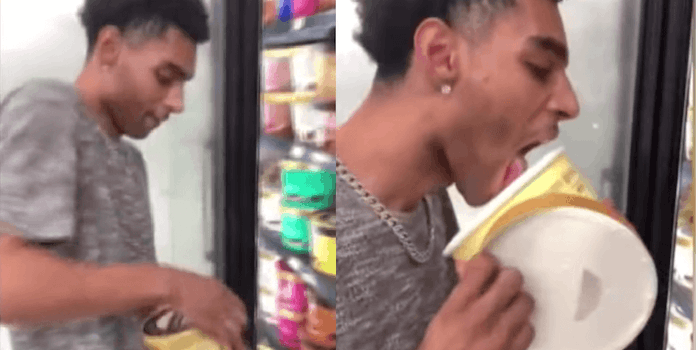 D’Adrien Anderson has requested probation instead of a year in jail.

One of the participants who engaged in the extremely gross viral “challenge” last year that involved Blue Bell ice creams and putting them back on the shelves at stores has reportedly pleaded guilty.

D’Adrien Anderson, 24, who recorded himself licking a Blue Bell ice cream and putting it back on the shelf at a Walmart in Port Arthur, Texas, is now asking for a lighter sentence than the one-year jail term he faces, according to WOAI-TV.

The incident took place in August 2019 and was among a series of related stunts seemingly sparked by a woman at another Texas Walmart in July. Her video led many to participate in the so-called ice cream challenge, and at some stores, guards literally blocked ice cream freezers from potential lickers.

Anderson was identified by social media posts online, according to KFDM. According to surveillance footage, Anderson purchased the same ice cream tub from the store even though it wasn’t shared on his social media, the New York Post reported.

At the time, the store suffered financially because it had to get rid of the ice creams, though it’s not clear how much was replaced or how great the monetary loss was.

After being arrested, Anderson was released on a $1,000 bond. He appeared before a judge on Thursday and asked that rather than one year of jail time, he get probation instead.