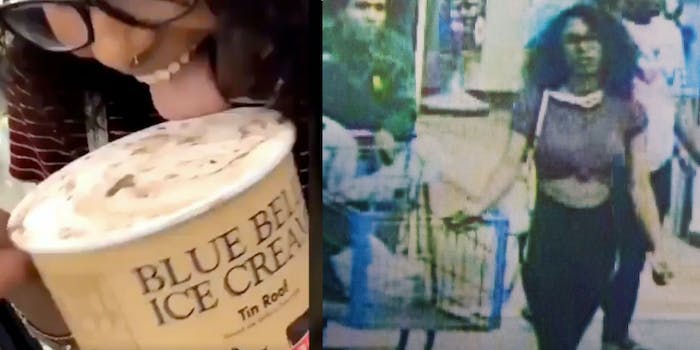 People are furious with her.

The now-infamous ice-cream licking video by a woman who then put the tub back on the shelf at a Walmart in Texas has become more than a viral sensation and a trend: She could potentially be charged with a crime.

Police in Lufkin, Texas said they have identified the woman in the video and are investigating the matter, USA Today reported.

The video, posted by user @BlindDensetsu last weekend, showed the woman licking “Tin Roof” flavored Blue Bell ice cream at a store and then putting the container back in the freezer—making it available for purchase to the next unsuspecting customer.

It’s all sorts of horrifying, and Blue Bell began investigating the matter immediately. The company reportedly sent out a note to all its division managers to help determine where the incident may have occurred.

A manager at a Walmart in Lufkin identified it as their branch due to a “unique merchandising” which matched with the video, the Lufkin Police & Fire department said in a Facebook post on Wednesday.

Lufkin Director of Public Safety Gerald Williamson has said that appropriate charges will be filed against the woman.

“Our biggest concern is consumer safety—in that regard we are glad to see the tainted product off the shelves,” he said.

Blue Bell has removed all half-gallon tubs of “Tin Roof” from the Walmart shelves in Lufkin, but people are even more infuriated upon learning that the woman may have had the flu, fact-checking website Heavy reports. She reportedly tried to start “an epidemic” with the #TinRoofChallenge.

“I say she buys the whole city of a Lufkin and the entire state of Texas and the country ice cream for a year so she can learn,” wrote one internet commenter.

“She needs to spend some time in jail and pay a stiff fine. That is so unsanitary, no telling what kind of germs she has,” wrote another person, detailing how a callous action can trickle down to dangerous effects in a regular household. “My husband is battling stage four colon cancer, I would hate to think he ate ice cream after she spread her germs when his immune system is so fragile.”

“Give her a tour of every step from dairy farmer, through production, and then to stocking the coolers and show her what all it takes to make that ice cream she did that to and the livelihood of people responsible. Who knows?… Maybe it will inspire better choices,” wrote another, more forgiving, user.

The woman in the video was originally identified as “Asia” on Instagram with the username “xx.asiaaaa.xx” and screenshots on the platform showed her commenting, “I really did that … You can call it Flu Bell ice cream now ‘cause I was a lil sick last week.”

The post wasn’t independently verified by the Daily Dot and a username under “xx.asiaaaa.xx” did not show up when the Daily Dot ran a search on Thursday morning.

Lufkin Police told USA Today that this could amount to charges of food tampering in Texas, which is a felony. “Tampering with a consumer product is a second-degree felony and carries a punishment range of 2-20 years,” an officer said. “The department is consulting with the FDA and federal charges may also be pending.”