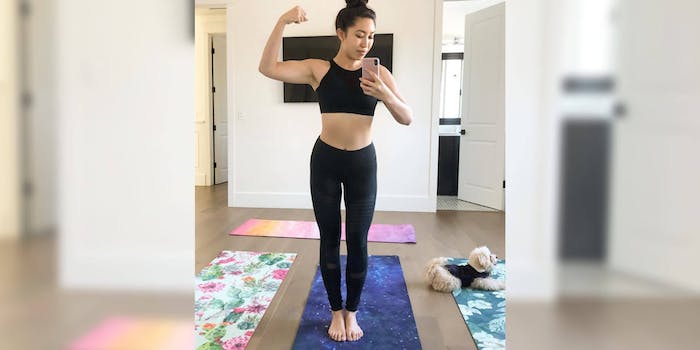 Cassey Ho defended herself on her popular blog Blogilates.

A fitness and wellness influencer who says she’d been “tiptoeing” around her feelings in fears of upsetting people finally shared a blog post about losing weight—and her fans divided over her honest stances.

“Today I woke up and decided that I needed to take back the life that I want to live,” Cassey Ho wrote on her popular blog Blogilates on Aug. 16, introducing her 90-day challenge.

“You can view working out as a negative or positive thing. Your choice! Your body. Your life,” she wrote later in the post. “But understand this—just because a woman wants to lose weight or change her body does not mean she’s not body positive. Do you hear me?”

Some fans were immediately supportive.

You said it yourself, she's sharing HER heaviest weight. It's unfair to hold her hostage to your, or anyone else's, feelings about your body weight or goals. You saying you would kill to be 130 would make people way over that feel awful, too. Can't internalize everything.

But she mainly received backlash, especially on Twitter, where people felt that sharing the “numbers” was contributing to the conversation about weight loss and body negativity.

“With the society we live in that is fixated on dieting and body shaming, it’s just unfortunate that someone with her platform would share her numbers like that because it makes people think that’s what they should weigh too even though their journey may be completely different,” Twitter user @eresthemilk wrote.

With the society we live in that is fixated on dieting and body shaming, it’s just unfortunate that someone with her platform would share her numbers like that because it makes people think that’s what they should weigh too even though their journey may be completely different

I'm not gonna judge your choices, I just wanna say that I'm getting some mixed signals here. You always say that weight is just a number, that you stopped weighing yourself and that how you feel is the most important thing. And yet you're setting a numerical goal for your weight.

Honestly, I think you’re promoting eating disorders under the guise of “health”. I know you’ve struggled in the past & hope you’re getting some help. Being “hesitant” about going out for a meal with your husband isn’t healthy. Love your workouts but your message is so skewed.

Some even suggested Ho herself was struggling with eating disorders, according to BuzzFeed. Ho told the news platform that while she was touched about their concern, she was disappointed.

“Your words have so much power, so I would caution people to be careful what they say, because you’re talking to someone real,” she told BuzzFeed.

She also shared her feelings in the updates over the next few days of her challenge.

“I appreciate your concern for me—I really do–but telling someone they have a mental illness and that I need psychological help without EVEN KNOWING ME is uhh—how do I say this—REALLY IRRESPONSIBLE, MEAN AND OFFENSIVE.” she wrote on her day-three post.