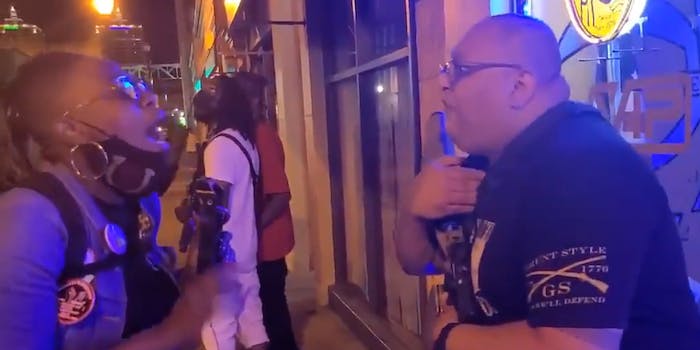 'I don't have an issue, because I don't see color.'

In a viral video, an armed Jordanian business owner in Louisville is questioned heavily about whether he believes that Black lives matter, in the aftermath of a protest around the contested indictment case around Breonna Taylor’s death by police.

The recent video, also making waves Monday on Reddit, was first posted by a reporter from extreme right-wing website the Daily Caller. It starts with a group already assembled around Fadi Faouri, owner of a downtown Louisville smoke shop, VIP Smoke Shop & Gifts. Armed and standing at the door’s entrance, a man asks the Jordanian immigrant whether “Black lives matter.”

The man, and then another protester, ask him to clarify his stance. “Nobody can intimidate me,” he replies.

The bulk of the group walks away and is replaced by another woman with a camera. She continues to challenge his non-stance. Faouri ultimately responds: “I don’t have an issue, because I don’t see color.”

In the second part of the altercation, he continues: “I don’t care about white, Black, purple, green, whatever the fuck it is.”

The group is attempting to get her way from Faouri, but she resists, explaining that she’s a documentarian capturing his stance. However, the taller man in the video is telling her it’s likely a waste of time and energy. Another man with a bullhorn arrives to disperse the crowd around Faouri.

Before the stand-off, Faouri told the right-leaning New York Post he had been sleeping at the store since the news of Taylor’s death at Louisville police’s hands and the subsequent protests.

“Stuff is being damaged on a nightly basis, people are shooting at each other every night,” said Faouri to the Post. “Every night we have a new store that got looted. They break in, they take whatever and go. They walk away.”

Following Kentucky Attorney General Daniel Cameron’s vehemently-contested announcement Wednesday that a grand jury did not indict the officers involved in the raid on Taylor’s apartment, the protests grew more prominent, and some claimed, more destructive.

Faouri was planning to move his business to another location a few blocks away, given his current site was near Jefferson Square Park, the centering point of protests. However, his new place was burned down. And because no company will insure new business in the area, he says, he will have to foot the repair bills.

Of note beyond Faouri’s story are the language and contextual usage of the video itself, which was shot by Daily Caller “field reporter” Jorge Ventura. The video has become a right-wing propaganda tool, stoking anti-Black Live Matters sentiments.

People replying to Ventura’s post proceeded to misrepresent BLM and the parties in the video. One accused the documentarian of being a potential suspect in the “firebombing” of Faouri’s new location. The word “firebombing” is first used in Ventura’s caption.

@TinfoilTricorn tweets: “The shouting woman should be under investigation for the firebombing she sounds like an extremist leader that will command attacks. I get the feeling this was a probe for another attack, they are selecting where they will target.”

But Ventura’s language is problematic, as there is no indication in the Post article, or anywhere else, that BLM members, or the protesters opposing Faouri, had anything to do with the location’s burning. Some also said that Ventura sensationalized and misled viewers with his headline for the video.

“There was no demanding anything,” tweeted @noahdesigns. “They were having a conversation that escalated into debate w the filmmaker who then argues with the protestors. This is the type of ‘funny style’ language that paints the negativity fueling all this hate. The media is having a ball with this!”