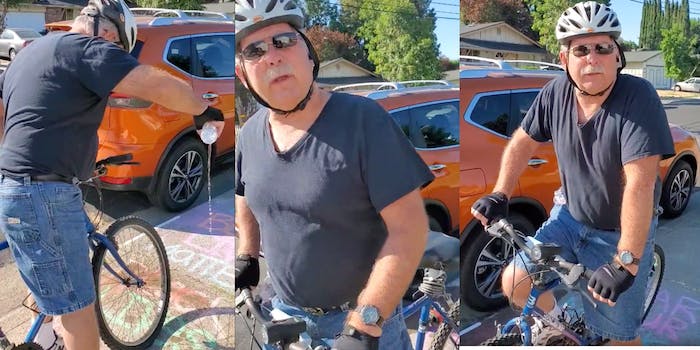 Manette Sharick caught and confronted her neighbor the fourth time he was erasing it.

Every time a San Francisco woman’s young daughter wrote “Black Lives Matter” in chalk on the sidewalk in front of her house, the word Black would end up being erased.

The fourth time it happened, Manette Sharick, who is Black, caught her neighbor via home surveillance video pouring water over the word to make it disappear, ABC7 reported.

In a viral video posted on Facebook Sharick confronts the man, who is white, about his actions and, she defends her and her daughter’s right to chalk the sidewalk.

Sharick told ABC7 she was upset because “it wasn’t the first time that it happened.” She filed a police report and will file a restraining order “to the fullest extent,” she wrote in a Facebook post.

“Writing with chalk on a sidewalk is causing no harm or damage to the community. If you disagree that’s fine but don’t damage what was written on a sidewalk on somebody else’s home. All you have to do is keep walking,” Sharick told ABC7.

In the video, the man, who would only identify himself to the news organization as Jim, told Sharick, “If you want to do it in other neighborhoods, then fine.” When she told him this was her house, he replies, “Then write on your driveway.”

In a call with ABC7 Jim said he continually erased the word “Black” because he believes BLM is racist and that “all lives matter.”

The phrase “All Lives Matter” was created in direct response to “Black Lives Matter,” and the movement for which it stands. The phrase attempts to minimize the systemic killing and oppression of Black people.

Sharick, who’s lived in the area since 1993, said she’s never experienced this type of targeted harassment. Her 3-year-old daughter’s chalk art was a result of Sharick teaching her about the movement, and she never thought someone would retaliate against the message.

A number of Sharick’s neighbors wrote “Black Lives Matter” and “BLM” on their sidewalks in a show of support.

A similar form of targeting in San Francisco went viral in June when a “Karen” and her husband called the police on a man for stenciling “Black Lives Matter” in chalk on the front of his home.

Throughout the video the woman, identified as Lisa Alexander, CEO of the skincare company LA Face, refuses to believe the man, James Juanillo, when he tells her he lives there.