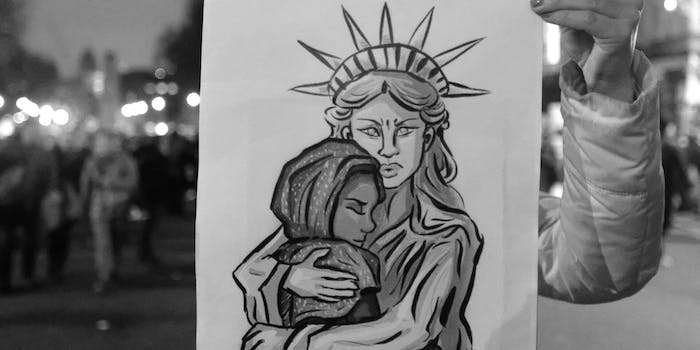 The Trump administration has announced a major decrease to the refugee limit.

People on social media are blacking out their photos to protest President Donald Trump’s proposal to bring the number of refugees permitted to resettle in the U.S. down to one-fifth of the limit set the year before Trump took office.

The Trump administration announced in September that it would only allow 18,000 refugees in the fiscal year 2020. In response, the Refugee Council USA initiated #BlackOut4Refugees to push for legislation that would guarantee a higher refugee acceptance ceiling.

The GRACE Act, a shortened title for the Guaranteed Refugee Admission Ceiling Enhancement Act, was introduced in April and would amend the Immigration and Nationality Act and introduce an annual guaranteed acceptance of at least 95,000.

The Refugee Council USA’s petition calling for a higher refugee ceiling reads, “The need for resettlement has never been greater, and the US risks betraying our values and our standing as a humanitarian leader, if we do not rise to meet that need. Communities are ready and waiting to welcome refugees.”

“Refugee resettlement is under attack,” Danielle Grigsby, interim director of Refugee Council USA, told the Daily Dot. “We must not allow President Trump to trample on our values and traditions.”

People changed their social media profile images and shared the campaign’s message on Sunday evening with the hashtags #BlackOut4Refugees and #Welcome95K.

Despite refugees planting churches, starting businesses, and being good neighbors we are closing our doors to them. 18,000 is the lowest refugee ceiling ever in a time of the greatest need. #blackout4refugees https://t.co/d4rZU2sk9R @WorldRelief @Refugees @POTUS @HIASrefugees

Today, we are mourning the thousands of refugees the Trump Administration does not want to resettle to safety. Join the #Blackout4Refugees and tag your friends! pic.twitter.com/UmrQuLU2N3

Refugee resettlement must remain an option for those who are out of options. But this year, the Trump Administration has proposed resettling fewer refugees than ever! Today, join the #Blackout4Refugees and tell Congress that you support refugees! Go to www.blackout4refugees.org for more information on how to take action. #RefugeesWelcome #Welcome95k

The Trump Administration continues to erode refugee resettlement and asylum in the U.S. We cannot stand for this. Go to https://t.co/1EXi5ZraeV and join the campaign #Blackout4Refugees

Based on historical averages, the US can #Welcome95k refugees each year. But the Trump Administration has proposed an unprecedented low number. This is morally and strategically wrong! Join the #Blackout4Refugees to show you support refugees!

Refugee resettlement must remain an option for those who are out of options. But this year, the Trump Administration has proposed resettling fewer refugees than ever! On October 7/Today, join the #Blackout4Refugees and tell Congress that you support refugees! Go to www.blackout4refugees.org for more information on how to take action. #RefugeesWelcome #Welcome95k

I am a descendent of refugees from the Czech Republic. My great grandfather fled communist Czechoslovakia in the late 1800s, boarding a ship under a false name…fearing arrest, deportation, and execution for refusing to serve the communist party. He and my great grandmother arrived in Chicago in 1887, planting the seed of opportunity each and every one of us, their descendants, thrive on today. We are artists, educators, nurses, doctors, mental health counselors, veterans, entrepreneurs…the list goes on. @realDonaldTrump @durbincampaign @senduckworth resettlement of 18,000 refugees in America in 2020 is inexcusable. Stop dismantling refugee resettlement. Refugees will make America great again. #WeThePeople #RefugeesWelcome #Welcome95K #refugees

Grigsby told the Daily Dot the petition reached nearly 1,000 signatures within its first hour of the launch.

The refugee resettlement program, which began in 1980, had previously made the U.S. the leading country with resettled refugees, according to a September Pew Research Center report. Under the current administration, the numbers have dropped historically low. The year before Trump took office, the cap was set at 85,000, which dropped to 45,000 for the 2018 fiscal year and to 30,000 for 2019.

The administration’s final decision on refugee numbers for 2020 will follow talks with Congress, according to the Hill. Officials told Reuters last month that refugee settlements, which have been suspended while the new limit was decided, will resume Oct. 22.