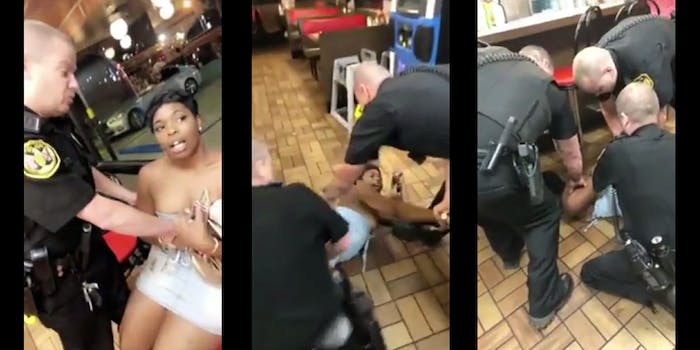 It's unclear who called police.

A 25-year-old Black woman was out with her friends early Sunday morning at a Waffle House in Alabama when she was dragged to the ground and forcibly arrested with her breasts exposed, AL.com reports.

Chikesia Clemons, who is from Mobile, was ordering food at a Saraland Waffle House when she was told plastic utensils cost 50 cents. Clemons and her friend Canita Adams reportedly did not have to pay for utensils before, so after the two canceled their order, Clemons asked for contact information for Waffle House’s district manager, Clemons’ mother, Chiquitta Clemons-Howard, told AL.com.

“They didn’t even ask her to leave, she was waiting for them to give her the district manager’s card so she could file a complaint on one of the waitresses,” Clemons-Howard told AL.com. “When they went to go get the card, that’s when the police showed up. The officer should’ve come in and said we need you to leave.”

Footage recorded by Adams shows a white police officer talking with Clemons and repeatedly grabbing her, after which another officer joined him and proceed to throw her to the ground and arrest her. Clemons wondered aloud why police were arresting her as they exposed her breasts and placed a hand on her neck, seemingly choking her.

“What am I doing wrong?” she cried in shock to police officers. “What did I do wrong?”

Clemons faces charges for disorderly conduct and resisting arrest, Clemons-Howard told AL.com. Both the Saraland Police Department and Mobile’s NAACP chapter is investigating the incident, and Chance the Rapper tweeted his support for Clemons, calling the arrest “unjust” and “wrong.”

“Stand with our women,” Chance tweeted this morning. “Defend their voice, and their right to ask why they’re being handled, being removed, being CHOKED.”

Protect our women. This is wrong, this is unjust and this happens to alot of women when there are NO cameras around. Stand with our women. Defend their voice, and their right to ask why they’re being handled, being removed, being CHOKED. Be infuriated. Be willing to fight 🖕🏾🐽 https://t.co/P8NMBrN0UH