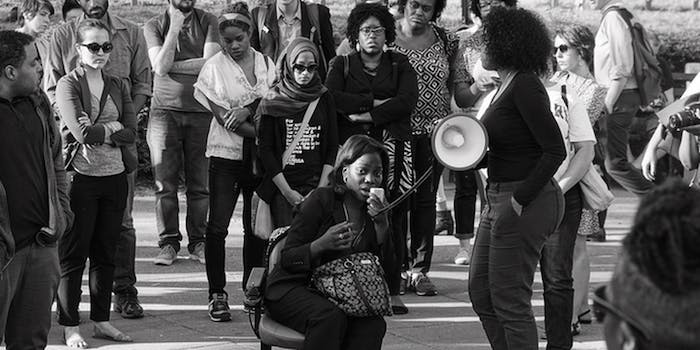 Here are all the #BlackTransLivesMatter protests around the country today

Rallies nationwide are calling attention to the murders of trans people of color.

Transgender people of color are fed up.

After an unprecedented number of murders of trans women of color this year, activists in the #TransLivesMatter movement have called on #BlackLivesMatter and other allies to march alongside them and demand an end to the violence.

Demonstrations will take place across the country today as part of a national Day of Action. In a growing list of cities from New York to Tacoma to Nashville, people are gathering on the streets.

We were able to confirm the locations of events in the following 22 cities:

On Twitter, activists and allies discussed the issues motivating protests using the hashtags #TransLiberationTuesday and #BlackTransLivesMatter. Many referenced the 17 trans women murdered within the first eight months of 2015, while others called out the larger #BlackLivesMatter movement for exclusion and urged activists to ensure that transgender people were included in movement goals.

#TransLiberationTuesday We are in a state of emergency. The majority of transgender women killed in the United States have been Black.

The life expectancy of a trans woman of color is 35 year old. This is why we need #TransLiberationTuesday. #BlackTransLivesMatter

You're not really here for #BlackLivesMatter if you don't realize ALL Black Lives Matter. #BlackTransLivesMatter

One time for the 17 trans women killed so far this year. #TransLivesMatter #BlackLivesMatter

Support for trans people of color has ramped up this year, with huge online protests against the whitewashing of Stonewall in a new Hollywood film, protests in New York in defense of the vogueing community depicted in the film Paris Is Burning, and long-held media silence on the unusually high homicide rate plaguing trans women of color finally beginning to break.

On August 10, a petition launched asking the White House to formally investigate the high homicide rate faced by trans women of color. The petition will automatically receive a White House response if it gets 100,000 signatures by Sept. 9. As of Tuesday, it had only 4,743.

Photo via Ted Eytan/Flickr  CC by 2.0