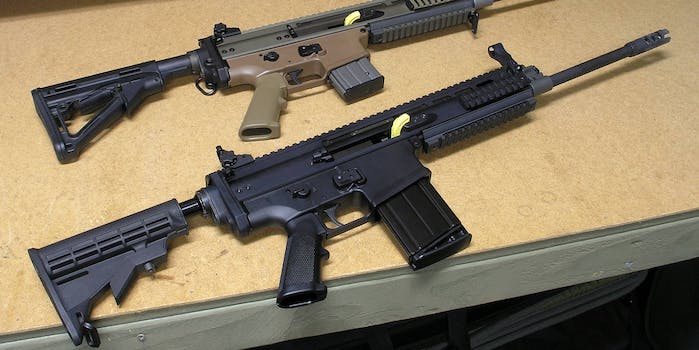 He also claims the Black Lives Matter movement should be 'flattered.'

Linc Sample recently put a “Black Rifles Matter” sign on his lawn in Boothbay Harbor, Maine. Sample says he put up the sign after seeing an ad in the local paper that supported an assault-style weapons ban. The sign continues, “YES we have ’em. NO you can’t take ’em.”

Oh, he also thinks the Black Lives Matter movement should be “flattered” he made such a sign, according to NECN.

Town officials started getting complaints about the signage, especially from tourists, but since it’s on Sample’s private property, there’s not much they can do about it.

Now #BlackRiflesMatter is trending on Twitter, with many pointing out how offensive the sign is, but others defending Sample’s First Amendment rights.

Black Rifles Matter in white hands. A black rifle in black hands is a call for gun control. @NRA

As a liberal I'm not offended by Black Rifles Matter. I'm offended that once again someone is making Maine look ignorant #embarrassed

People have been in hot water over plays on “Black Lives Matter” before. Last month, a restaurant in New Mexico drew criticism after selling shirts that said “Black Olives Matter,” and “Black Guns Matter” paraphernalia has been making the rounds for some time now. Many see this as problematic, not only because the BLM movement was started in response to the overwhelming number of black people shot by police, but because who gets to own guns is also often seen as racist.

The National Rifle Association has long defended legal, responsible gun owners, and blamed gun violence on basically everything but guns. However, when black man and legal gun owner Philando Castile was shot and killed by police, the NRA was oddly silent. Many took it as proof that the NRA only views white people as responsible gun owners worth defending.

The good news is Sample says he changes his sign often, so the message won’t be up for long. Can’t wait for what the next one says.