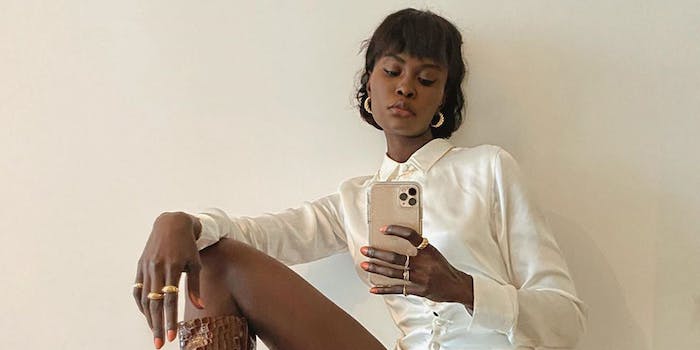 The Fashion Institute of Technology (FIT) issued an apology on Tuesday after a Black model spoke out about a student’s use of racist accessories in a university fashion show.

The runway show was for the graduating students of FIT’s master’s program in fashion design, according to an open letter from FIT President Joyce Brown. Brown apologized and said she is investigating the situation to determine how this happened.

“Currently, it does not appear that the original intent of the design, the use of accessories or the creative direction of the show was to make a statement about race,” Brown said. “However, it is now glaringly obvious that has been the outcome. For that, we apologize—to those who participated in the show, to students, and to anybody who has been offended by what they saw.”

The Washington Post reports that three women wore all three accessories. Two women wore only fake ears and eyebrows, and one woman refused to wear any of it.

Amy Lefévre told the New York Post in an interview last week that she was told, “it was fine to feel uncomfortable for only 45 seconds.”

“I stood there almost ready to break down, telling the staff that I felt incredibly uncomfortable with having to wear these pieces and that they were clearly racist,” Lefévre said. “I have never felt like that in my life.”

Jonathan Kyle Farmer, the chair of the fashion design graduate program, issued an apology to Lefévre.

“I take full responsibility,” Farmer said. “And am committed to learning from this situation and taking steps to do better.”

“Regardless of intent or artistic vision, we must be continually aware of that which constitutes an authentic artistic expression, and that which creates a risk to the intended message and interpretation of the art form,” Brown said. “There is no room for error which can be interpreted as racism, homophobia, religious intolerance or any other kind of bigotry.

FIT did not immediately respond to the Daily Dot’s request for comment.