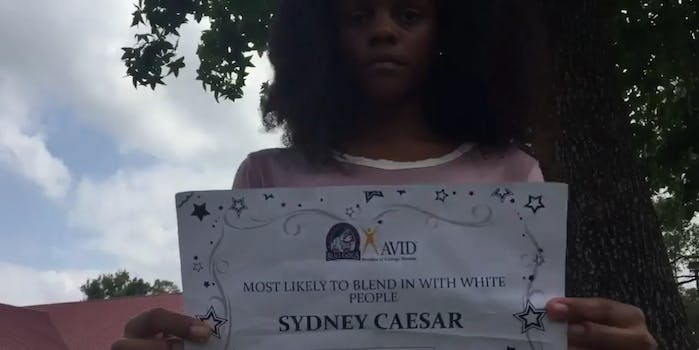 A junior high school teacher in Texas reportedly gave a young black girl an end-of-year award proclaiming her “Most Likely To Blend In With White People,” just the latest wildly offensive award reportedly given by that teacher at the school. The offensive title was given to Sydney Caesar in advance of her graduation from 7th grade at Anthony Aguirre Junior High School in Channelview.

According to Fox 26, a Houston-area Fox affiliate, the teacher in question is Stacey Lockett, the same woman who came under scrutiny mere days ago for another trio of grossly inappropriate superlatives she reportedly handed out to students. The titles included, “Most Likely to Become Homeless,” “Most Likely To Cry Over Every Little Thing,” and perhaps most shockingly, “Most Likely To Become A Terrorist,” which was given to 13-year-old Salvadoran-American honors student Lizeth Villanueva.

Another student comes forward with an award that says "most likely to blend in with white people" and she says she's upset. @Fox26Houston pic.twitter.com/7f7HBRi32O

Caesar’s family condemned Lockett’s decision to put such a label on one of her students. According to Fox 26, Caesar reportedly didn’t go to school for her final classes after receiving the award, showing a similar alienation that Villanueva did after being dubbed a likely future terrorist. Caesar’s sister, Lauren Easton, was none too pleased.

“Where is the common sense in that?” Easton said. “I mean, how can you think that is okay to say it in the first place and then right after a major event has happened? It just doesn’t make any sense. I feel really bad for her because I saw her in class, she was really upset about it and she just wouldn’t talk at all for the rest of the day.”

The girls’ mother, Latonya Robinson, also criticized the school and Lockett, accusing them of bullying her girl. She also lamented how this label may stick to her while she attends the school.

“For that child to either be called a terrorist or she’s not black enough, basically now the students are taking that and that’s her label for the rest of the school year,” Robinson said. “Everyone doesn’t believe that this is real. But yes, this certificate shows that this is real. This happened. And we have enough bullying as it is by other students, now it’s being done by a teacher.”

Given that the ideal role of a teacher is to educate children and help them grow and mature through their school years, the fact that at least two students have been alienated to the point of not showing up to class is a big problem. That’s to say nothing of the obvious racial implications of both the Villanueva and Caesar cases.

For it’s part, the Channelview Independent School District released a statement to Fox 26, the second one it’s had to put out in a few days. It says that the district does not condone what happened and that it’s “taking this matter very seriously.”