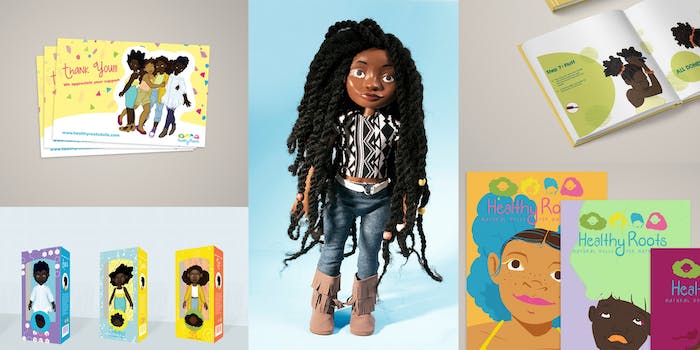 "You have to do more than paint a doll brown."

Children nowadays have more options than ever play with a diverse range of dolls. But toy makers can always do better. Sometimes, that toy maker will have to be a college student with a great idea.

Today sees the launch of the Healthy Roots Kickstarter, a project founded by 21-year-old Yelitsa Jean-Charles, a 2015 MassChallenge finalist and student at the Rhode Island School of Design. Her goal? To teach culture, identity, and love with dolls representing the diversity to be found within the African diaspora to girls ages three to 12.

The Healthy Roots dolls are best friends from diverse backgrounds: Zoe is an African-American book lover who is described as a resourceful and creative problem solver; Gaïana, a Haitian girl who loves music; Dara, a Nigerian girl who codes websites; and Marinda, an Afro-Brazilian girl who is into nature science and sports.

Zoe joins other dolls of color offered by small companies through crowdfunding on Kickstarter. The Angelica Doll, which successfully funded in June and is already in production, is a black 18-inch vinyl doll with hair that is meant to be styled and then washed and styled over and over again. Another campaign, The Double Dutch Dolls, makes six multicultural dolls who are hip fashionistas. Their Kickstarter campaign successfully reached its goal in 2014.

But Jean-Charles and Healthy Roots explicitly address issues beyond self-esteem for girls of color. Jean Charles, who raises issues of both racism and colorism in her Kickstarter video, wrote in an email to The Daily Dot that she really wants her dolls to be accessible:

“Black dolls already exist, but many of them only scratch the surface level of representation. You have to do more than paint a doll brown. We recognize that we need to have diversity and education in order to deconstruct colorism and racism. We do that by creating multiple dolls and storybooks that teach girls about themselves in a way that they can identify with.”

The Healthy Roots dolls will also be accompanied by The Big Book of Hair, a hair care manual for little girls that is illustrated by Jean-Charles. One of the Kickstarter perks offered includes Kreyol Essence hair care products so that little girls can learn how to care for their own natural hair.

The increase in dolls of color, especially those offered through the crowd-funding website Kickstarter, can be seen as a response to the void that the big toymakers have yet to satisfactorily fill. Writers like Paige Tutt express what it was like to grow up as a child of color surrounded by white Barbie dolls. The Clark Doll Test, first performed in the 1940s and often replicated (including by Anderson Cooper), presents children with two diaper-clad dolls, identical except for skin color, and asks them to identify which doll is “good” and “pretty” versus which doll is “bad” and “ugly.” The Doll Test has been joined by the Implicit Association Test. The IAT supports statistics that show 70% of whites have an anti-black bias, as do 50% of blacks.

Jean-Charles seeks to change that as she currently tries to fundraise for a minimum order of 2,500 dolls. She wrote to the Dot in an email, “Toys can have a huge influence on children and that is the reason we choose to address these issues through dolls. Girls admire their dolls and look up to them. Dolls are a social tool that can be utilized to create social change.”