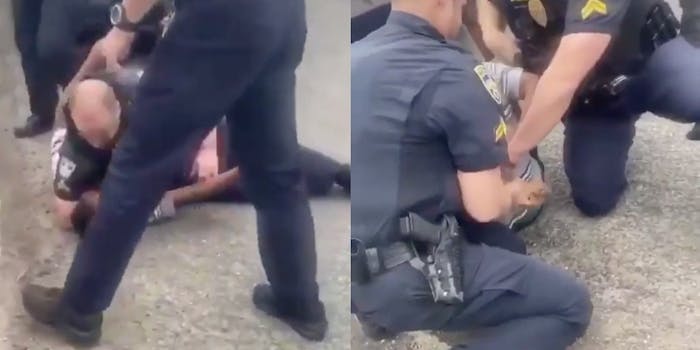 Bodycam footage has not been released to the public.

A video showing a Louisiana police officer allegedly choking a 13-year-old Black teenager has resulted in calls for an investigation into the incident.

The footage was first posted on Sunday, not long after Baton Rouge police officers arrested the teen following a call about teens disturbing others in the area.

The short clip doesn’t show the events leading up to the altercation but starts after the police officer already has the child pinned to the ground, his arm wrapped around his neck. Bystanders yell for him to get off and stop choking the teen.

Another screams that the man is “choking” the teen before another police officer approaches. They pull the teen up off the ground and force his hands behind his back.

According to CNN, this was the second call police responded to in the area regarding a disturbance. Both the teen and a 13-year-old girl were taken into custody following the altercation.

The video comes amid increased scrutiny surrounding police brutality against Black communities over the past year.

Calls for an investigation into what happened were immediately sounded, and Baton Rouge Mayor-President Sharon Weston Broome and Police Chief Murphy Paul appear to be heeding the request.

“We will not skirt around these issues,” Broome said. “I will make sure this is thoroughly investigated.”

The officer’s body camera footage was released to the family on Monday, and a request has been made to the court for it to be released publicly, a necessary step as the footage involves a child.

The teen’s attorney, Ron Haley, Jr., has said that his client has been released from custody and is urging everyone to wait for the footage to be released before drawing conclusions about the incident.

“I appreciate the swift response from Mayor Broome and the promises made by Chief Paul,” he said. “However, too many times in our community we see obvious police misconduct go unchecked and unpunished.”

Haley later added that past unjust events that “have sparked this moment of change also create a heightened sense of angst and anxiety when it comes to interaction with law enforcement.”

“I’m sure [my client] didn’t wake up on Sunday believing he would be in the middle of a civil rights issue captivating the city,” Hayley said. “That is a lot of pressure on a young person.”

Broome and Paul have reportedly reviewed the body cam footage in full but haven’t yet come to a decision regarding potential disciplinary action against the officers involved in the incident.