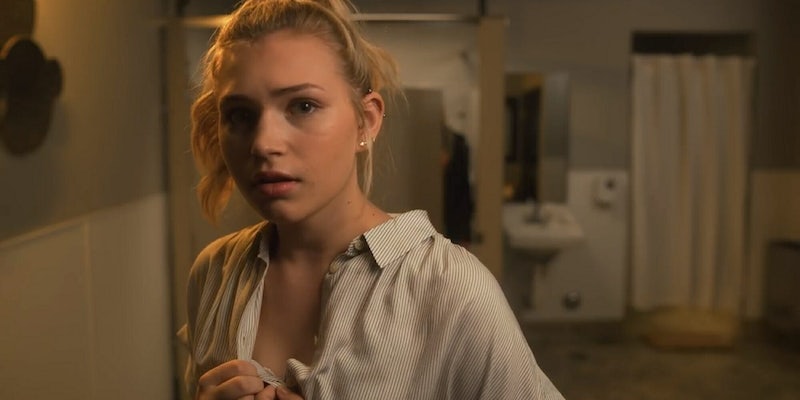 No On 3 Keep MA Safe/YouTube

A melodramatic conservative ad is facing scrutiny for insisting that transgender rights will give sex offenders the opening they need to snoop on women in locker rooms.

In the ad, a man in a hoodie sneaks through a locker room and stalks a woman getting changed while intense music plays in the background. Suddenly, he opens a stall door, causing the woman to nervously shiver. The ad warns Massachusetts women that “any man” can enter a woman’s bathroom “at any time,” including “convicted sex offenders,” and that they could be punished as a result.

“And if you see something suspicious and say something to authorities, you could be the one arrested and fined up to $50,000,” the ad warns.

Keep MA Safe is behind the transphobic ad, as the organization believes that Senate Bill 2407 “eliminates the right to privacy and safety in public restrooms, locker rooms, showers, and changing facilities.” Of course, there’s a lot about those claims that just doesn’t make sense. For one, the law writes that transgender individuals can access gender-segregated areas that are “consistent with the person’s gender identity.” It also gives the attorney general’s office the power to issue guidance for legal action pertaining to “any person whose assertion of a gender identity is for an improper purpose.” In other words, if a person commits sexual harassment in a bathroom or locker room, they would still face sexual harassment charges regardless.

Transgender activists call the ad “fear-mongering,” arguing that it has a “deep and troubling impact” on transgender communities.

“This advertisement from anti-transgender activists relies on lies about our rights and identities,” Massachusetts Trans Political Coalition’s executive director Mason Dunn told PinkNews. “This kind of fear-mongering has a deep and troubling impact on our community as it equates our identities with crime or deceit, when transgender people only seek to live authentically and free from discrimination. We will continue to speak out and defend our rights, through education and awareness.”

While anti-transgender organizations often rail against transgender protections by claiming women’s safety is at risk, one study published in Sexuality Research and Social Policy concluded that “fears of increased safety and privacy violations as a result of nondiscrimination laws are not empirically grounded.” In other words, public accommodation protections help transgender people feel safe, and they don’t come at the expense of others, even if anti-LGBTQ organizations like to claim the opposite.