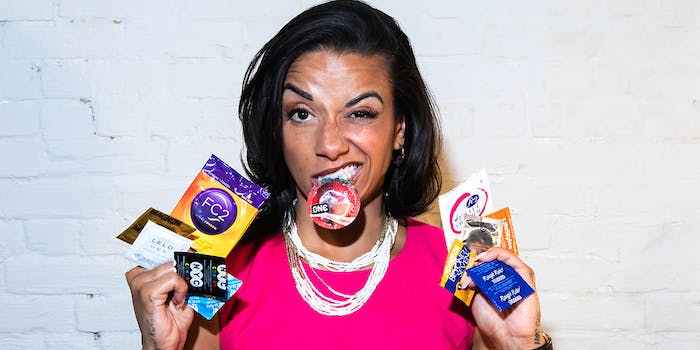 When it comes to sex and visibility, representation equates to power.

In her groundbreaking book Pleasure Activism, author and activist Adrienne Maree Brown wrote about the pursuit of pleasure as an activist principle. For most of us, that includes sexuality that enriches our lives and is a way that we connect with others.

Unfortunately, until recently, publicly claiming sexuality as part of an enriching existence has not been available to a diverse range of women and members of the LGBTQ community. Sex-positive platforms are supposed to be a safe haven for women and LGBTQ folks to claim bodily autonomy. But racial diversity is key in addressing problems that affect people of color, including generational trauma, equitable practices for sex workers of color, and safe sex.

But today is a different world than the one Pamela Anderson’s blonde-haired, blue-eyed archetype dominated. Black Lives Matter has finally landed much-needed visibility for a range of Black issues. Hard-won Asian American representation in Hollywood has given young yellow and brown citizens new hopes and aspirations. The barrier of entry to creating a platform has been erased by the internet, allowing anybody with a passion and a point to educate their audience with never-before-seen accessibility. Sex workers, young professionals, and educators of color in the internet age are promoting more equitable sex education and positivity practices than ever.

The eyes of the community

Creating a space where children of immigrants were able to discuss their sexuality with people who had similar experiences was the driving force behind the Asian American Feminist Collective’s sex and love talks, a monthly in-person forum (on hold due to COVID-19) where women of color discuss their sex lives. Culturally, communities of color are often used to keeping their private lives under wraps. For South East and East Asian immigrant communities, especially, purity is often valued, and sex is not discussed in the home.

“I think in a lot of immigrant communities, there’s this idea that you especially as a young woman, when you’re out in the world, you’re representing your family, right? You’re also representing your racial identity,” Asian American Feminist Collective co-founder Senti Sojwal told the Daily Dot. “You have the eyes of the whole community on you.”

These cultural taboos have a profound impact on sex education. With medically correct sexual education only enforced in 15 U.S. states, families and the internet are the main sources of sex education in the U.S., the latter being unreliable and precarious.

“Oftentimes in white culture, there is an expectation that one day your parents are gonna sit you down and have the sex talk with you,” Sojwal said. “And I can guarantee you that almost every single one of my friends who grew up in immigrant households, that just that day never came … Something I think is really common in the immigrant community [is] where sexuality is silenced.”

Her body, her choice

According to self-proclaimed “sexpert” and 15-year community activist Michelle Hope, the lack of sexual education for teenagers and adults is symptomatic of a larger struggle for bodily autonomy in communities of color. Her work has been showcased on platforms such as TEDx, popular podcast Lip Service, and nationally syndicated radio show the Breakfast Club. Growing up biracial in small-town Indiana to a lesbian mother steeped in ‘70s feminism, Hope was acutely aware of racism and sexism. But it wasn’t until after her stint as a stripper that she connected the two.

“That was when I really learned about sexuality; not just the genital act, but the first place I started understanding the concept of ‘my body my choice,’” Hope told the Daily Dot. “I had seen a dancer go out on my lunch break, and I saw a woman go out with a customer. I proceeded to see them perform oral sex on (the customer) in the car.”

One incident, in particular, shifted Hope’s perspective. “I remember saying something to someone, and this woman was like an elder in the strip club. I was like 18, and she was in her 30s at the time,” Hope explained. “And she grabbed me by the arm and pulled me into a corner and was like, ‘How dare you judge another woman. That’s her body, so it’s her choice on how she uses it to get money. She got a family, she got bills to pay, and she’s got mouths to feed. You can never judge somebody.’”

“It’s hard for people of color to understand consent, especially black people, because the idea of body autonomy is so foreign.”

This realization about bodily autonomy later spurred Hope to further her education in human development and promote tangible and practical ways to improve sex—and lives—in her community. The bodily autonomy of women of color has been invaded in many instances throughout history, from the founding of gynecology during slavery to the forced sterilization of Latinas in the ‘70s.

“I went to a club once where if you had never been at the club before you had to go through a 30-minute consent workshop. And I was talking to a friend of mine, a male cis-gendered heteronormative man of color, who’s like, ‘I wouldn’t be able to control myself.’ So that made me think more deeply about consent, and how communities of color understand consent or process consent,” Hope said. “And what I came to realize is that, well, of course, it’s hard for people of color to understand consent, especially Black people, because the idea of body autonomy is so foreign.”

This is especially chilling in light of accusations made last month that ICE detainees were being sterilized against their will. “In the United States to this day, we as black people do not have full body autonomy,” Hope said. “When a cop can come up and frisk you in the streets, with no legitimate reason other than you look suspicious, you do not have body autonomy, because that is an unwelcome touch from another person that you have not given consent for.”

Representation in education and bodily autonomy are cornerstones in sex positivity for people of color and why a range of voices being heard is so essential.

“While sex positivity as a cultural trend is something that is really white, we know that a huge swath of sex workers are people of color, women of color, trans women of color,” Sojwal said. “These are also the people who have really I think created sex positivity as we know it today. These are the people who are demanding justice and safety for sex workers and people who are on the front lines of thinking about sex positivity, and not just as a social media trend, but as a material means of justice that our communities need.”

“But when it comes to representation … I don’t know how many times I’ve been told, you can’t be on the cover because people will think it’s an Asian movie,” Asa said.

Just as with mainstream media, changing the way people of color are portrayed can shift how people view them. “I think it is actually up to us to get rid of those labels first because people aren’t going to just stop searching for it on their own,” Asa explained. “Like people search for what is available to them. And as long as we make it available, they will continue searching for it.”

Without appropriate representation, kink is often misconstrued as a “white thing,” a notion that is not only untrue but robs many of a full spectrum of sexuality. As Black women who are comfortable and loud about their sexuality, WeezyWTF and Mandii B of the Whoreible Decisions podcast frequently joke about “kink being a ‘white thing,’” while emphasizing how sexuality comes in fifty shades of melanin.

WeezyWTF and Mandii B launched their podcast in 2017 while working full-time in finance and tech, respectively. Their monikers protect their professional privacy—but that’s the only thing private about the podcast. Black women in sex work, kink, and polyamorous relationships are just a few of the topics discussed.

“We’ve been very vulnerable since day one with sharing a lot of our most intimate moments,” Weezy told the Daily Dot. “We still have a long way to go for women, especially Black women, being open with our sexuality.”

While the show centers around the sexual experiences, likes, and dislikes of themselves and their guests, a central fight for holistic Black sexuality emerges. Guests include sex tech activist SX Noire; Black, polygamorous, and kinky couples; dominatrixes; and pastors.

“We hope to bring voices to not only the community of kink, but also sex work and making sure everyone’s safe,” Weezy added.

While the wounds from generations of trauma, patriarchy, and cultural taboo are slow to heal, it’s promising to see the internet working its egalitarian magic: Creating community and allowing marginalized voices to be heard.

“Sex positivity is not just about putting your posts on Instagram and feeling good about it. It’s about if we have a society that actually affirms and supports sexuality,” Sojwal said. “I think it’s definitely an issue of structural racism and who has access to platforms and who has power. But I definitely think that we are seeing that be disrupted more and more.”