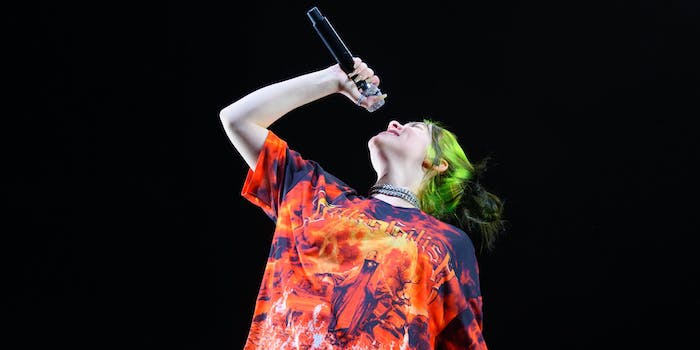 'If what I wear is comfortable, I am not a woman. If I shed the layers, I am a slut.'

Billie Eilish has had it with body-shaming.

As her world tour kicked off in Miami Monday night, the 18-year-old singer delivered an impacting speech aimed at body-shaming. Her powerful message spoke to many fans as she addressed critics of her fashion choices and style.

Now Eilish is making the message even more clear through her pointed speech.

Eilish’s message paired with a video of her slowly removing her shirt before sinking beneath the surface of a black, viscous fluid.

While performing the show, Eilish dressed in typical baggy attire in her favorite acid-green. For years, she has been forced to defend her decision to dress the way she pleases. More recently, people have even tried to interpret her style as a criticism of other artists. Eilish has pushed back against the idea, vocally supporting each individual’s right to dress as they please.

Her mid-concert body-shaming message drove this point home. “So while I feel your stares, your disapproval or your sighs of relief, if I lived by them, I’d never be able to move,” she said in the video interlude. “Would you like me to be smaller? Weaker? Softer? Taller? Would you like me to be quiet? Do my shoulders provoke you? Does my chest? Am I my stomach? My hips? The body I was born with, is it not what you wanted? If what I wear is comfortable, I am not a woman. If I shed the layers, I am a slut.”

Near the end of the interlude, Eilish urged people against making assumptions. “You make assumptions about people based on their size. We decide who they are. We decide what they’re worth,” she said. “If I wear more, if I wear less, who decides what that makes me? What that means? Is my value based only on your perception? Or is your opinion of me not my responsibility?”