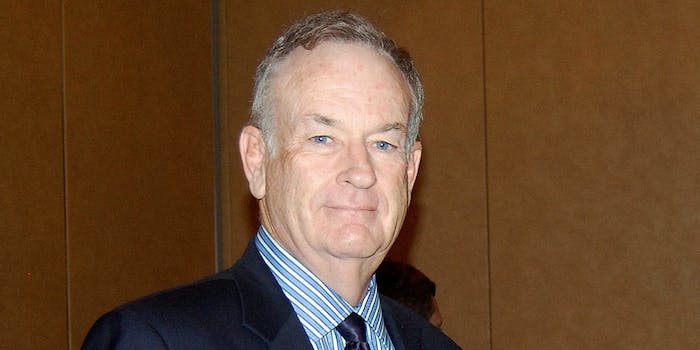 Bill O'Reilly's team is leading a witch hunt against his supposed witch hunt.

Bill O’Reilly‘s team is questioning the credibility of one of the women who accused him of sexual harassment, a claim which help get O’Reilly ousted at Fox News. According to LawNewz.com, O’Reilly’s team took a story about one of the women’s 2015 arrest to multiple outlets, including the Washington Post, in an effort to cast doubt on her harassment claims.

The woman, Perquita Burgess, is Black and worked as a clerical temp at Fox News in 2008. She alleged that O’Reilly had made unwanted remarks in her direction, once  calling her “hot chocolate,” and another time saying, “Looking good there, girl!”

According to the story peddled by the O’Reilly camp and just published by conservative site Newsmax, Burgess was arrested in February 2015 for making a false report and obstructing a court order. Burgess had called the police about a boyfriend having hit her with a gun, but recanted once police arrived at the scene. Throughout the piece, it’s clear the Newsmax and O’Reilly teams have latched onto this detail to call into question Burgess’ accusations against the former Fox host:

O’Reilly voiced frustration that the media had published harshly negative accounts about him without checking on the background of the accusers.

“The press just printed everything she said,” he said. “She’s on ‘The View,’ and nobody’s even checking her out? I mean, come on.”

“This is why people use the term witch hunt,” he said.

O’Reilly, a best-selling author and star of the No. 1-rated cable news show for 16 years, maintains there is “not one shred of evidence to back any of these accusations.”

However, according to LawNewz, Burgess’ boyfriend said the allegations were based on a misunderstanding, and they weren’t pursued by police or prosecutors. According to Burgess’ attorney, Lisa Bloom, all related charges against Burgess were dropped.

The Newsmax piece also referenced a tweet in which Burgess called herself “hot chocolate” in order to question the issue she took with O’Reilly using the term. Bloom disagreed:

“Ms. Burgess has used many terms to refer to herself, including on occasion ‘bitch’ and the N-word. That does not give others—especially her superiors in her workplace—permission to use offensive language about her.”

O’Reilly went on to share the story on Twitter, writing he was “sorry to have to post this article but it is necessary to expose the evil in play in this country.”

Sorry to have to post this article but it is necessary to expose the evil in play in this country. More to come. https://t.co/okplbsK9iC

Please check out https://t.co/ZNSXkWqnIX for expose about a person who attacked me. Very telling. https://t.co/X5FRv8k07c

According to Bloom, O’Reilly’s team had taken the story to the Post, and she had been interviewed by the publication regarding news of Burgess’ arrest. The paper didn’t publish the story, however.

“‘Sorry to post’? Is Mr. O’Reilly now living in the ‘Some Spin Zone,'” Bloom told LawNewz.

Speaking on the Today Show on Tuesday, O’Reilly continued to deny the allegations against him and said his legal team was “very aggressive” in pushing against what he called a “hit job” done by the left to tear down Fox News. When asked by Matt Lauer if O’Reilly had caused any “self-inflicted wounds,” O’Reilly doubled down.

“You know, nobody’s a perfect person, but I can go to sleep at night very well knowing that I never mistreated anyone on my watch in 42 years,” O’Reilly said.

WATCH: “This was a hit job. A political and financial hit job.” @billoreilly’s full interview with @MLauer https://t.co/btlpOQFXzR

In April, the New York Times published a story revealing Fox News had paid out $13 million in settlements with five women who came forward with sexual harassment accusation against O’Reilly. Burgess came forward with her accusations three weeks later.