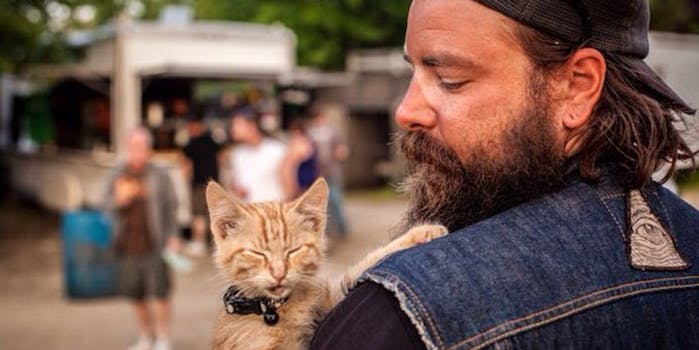 Party Cat is living a great life on the open road.

Rescued by New Jersey biker Pat Doody at truck stop, Party Cat was found with burns all over his body. Instead of leaving him behind, Doody tucked him in his vest and continued on a cross-country adventure.

Doody picked up Party Cat in Nevada and has been documenting their trip together back to New Jersey.

“I was at this truck stop getting gas, and this little guy just needed help,” he told Revzilla. Party Cat is recovering well and has seen a vet.

Despite his name, Doody describes Party Cat as “so chill.” Doody has a YouTube channel, but he has yet to make a video featuring Party Cat, and his Instagram is currently locked. Thankfully, Doody’s Tumblr is full of adorable cat pics, and we’re waiting patiently for Party Cat’s eventual social media stardom.