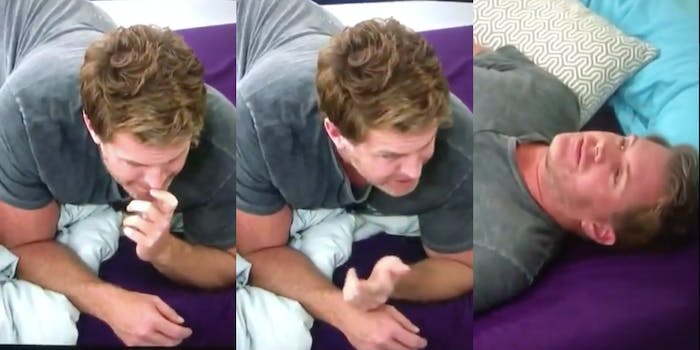 Petitions are calling for his removal from the show.

Fans of Big Brother created a petition to get one of the contestants kicked off the popular reality TV show for allegedly using the N-word.

In a live feed on Wednesday night, Memphis Garrett has a conversation with another contestant, Cody Calafiore. While they talk, Garrett brings up David Alexander, a Black contestant on the show. Fans are claiming they hear Garrett say, “Dude, David’s a [N-word].”

It has yet to be confirmed whether or not Garrett said the N-word. Fans are pointing to a different camera angle of the interaction as further proof that he says the slur. It shows a look on Garrett’s face after the slur was allegedly made that suggests he knows he messed up. “It’s the oh no *I fucked up look *that’s on Memphis face that seals it for me. This man manage restaurants. I can only imagine how he treats his employees,” one Twitter user wrote.

The petition to have him immediately ousted was created on Change.org. ”If left unchecked, we could be witnessing real-life harm from a privileged white a**hole upon a black man who is ALONE in the house,” the creator of the petition wrote. “After almost all the other people of color have been evicted/threatened. THIS IS NOT OKAY!!!”

In another petition calling for his removal from the show, Garrett is accused of acting in a “racially charged” way against Alexander. Creator Sohpia Cornelius wrote, “Memphis Garrett, a contestant on Big Brother: All-Stars has said and done racially charged things to another contestant on the show, David Alexandar. He called referred to him as ‘boy’ in a demeaning way and put him on slop to get him to ‘blow up’ and act crazy. This is disgusting and there are no excuses for this. At. All.”

This is not the first major controversy that the show—or even this season— has seen. A group of the contestants, including Garrett, were recently filmed making fun of a fellow contestant’s autism.

CBS did not immediately respond to the Daily Dot’s request for comment.