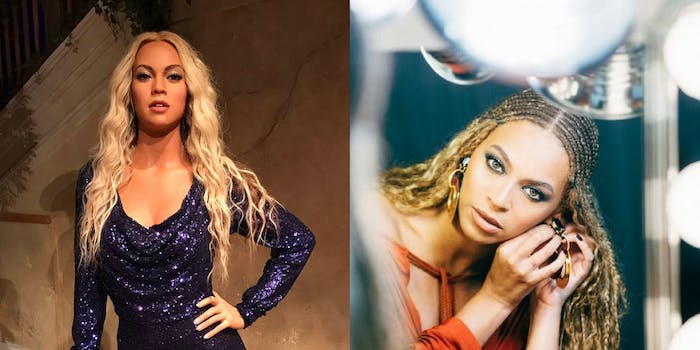 The internet wants revenge upon whoever made these Beyoncé wax figures

Beyoncé might be an international superstar, but clearly, there are still people on god’s green earth who have yet to even look at her general image—specifically, Madame Tussauds wax sculptors.

On Tuesday night, the Beyhive stood in vitriol as a Ciara fan account tweeted a photo of one of Bey’s wax figures from Madam Tussauds.

“Beyoncé [sic] wax figure at Madame Tussauds is FIERCE!” the post read. According to other users, the figure is from the wax figure attraction’s New York location.

This had to have been a diss at Bey’s wax replica, because, TBH, it looked absolutely nothing like her, sending her fans into a frenzy. Not only did the wax figure’s skin tone look much lighter, almost white, but lacked all resemblance in Beyoncé’s facial features—nose, jawline, lips, and all.

nah this is not "bey". They tried to call it that tho. its just not.

I thought this was Lindsay Lohan at first glance.

Others who were unimpressed with Madame Tussauds’ attempt at portraying Queen Bey pointed out just how not like Beyoncé her other wax figures have looked, too, even from the company’s other attractions.

Perhaps it’s just the angle? These photos still don’t do Beyoncé justice, but at least they’re not as harsh as the latest one her followers have taken to hating.

But even here, Beyoncé’s wax bust is nowhere near close to her person as Katy Perry’s and Taylor Swift’s figures are to theirs.

This wax figure appears a tad more accurate, though Bey’s eyes and eyebrows are still slightly off.

NOT ONLY DID MBC DISCOVER SNAPCHAT MISSPELLED BEYONCÉ'S NAME, THEY ALSO USED A PIC OF HER MADAME TUSSAUDE WAX FIGURE YALL ARE A JOKE pic.twitter.com/ieFnQ6rFnG

And we have the eyes fixed on this Bey, but forget about getting her nose or mouth down.

Even her Madame Tussauds Tennessee wax figure is completely wrong.

Congrats to @Beyonce for winning two Grammys last night. You can see her wax figure featured at @Tussaudsnash this spring #MadeinTN #Grammys pic.twitter.com/YuxNVCzVjM

And these figures have got to be the best of the sad bunch, but they’re still off.

The best Beyoncé wax figure I have seen so far and they are still off pic.twitter.com/Y1SLLZTftU

Clearly, the sculptor for Beyoncé’s Madame Tussauds New York figure isn’t alone in his mistakes, but that doesn’t excuse any of the poor attention to detail seen in these other figures, too.

“At Madame Tussauds, our talented team of sculptors take every effort to ensure we accurately colour match all of our wax figures to the celebrity being depicted. Lighting within the attraction combined with flash photography may distort and misrepresent the colour of our wax figures which is something our sculptors are unable to account for at the production stage.”