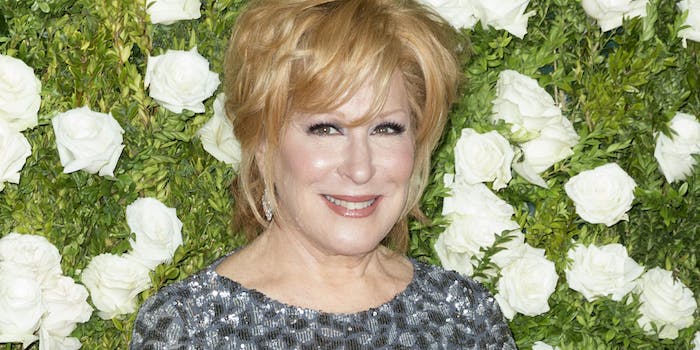 On Thursday night, many people discovered that Bette Midler trending on Twitter in October was unfortunately not Hocus Pocus-related.

Midler tweeted out “Women, are the n-word of the world,” and then went on to detail how women are silenced and disrespected. It’s a dated view on feminism, and to many, it was the epitome of white feminism in action.

After the pushback started, Midler tried to explain the quote—which is the title of a song from John Lennon and Yoko Ono’s 1972 album Some Time in New York City and was reportedly first coined by Ono in a 1969 magazine interview. Midler then doubled down on its perceived relevance, stating, “This is not about race, this is about the status of women.” That also didn’t help.

Midler eventually apologized, saying the “too brief investigation of allegations against Kavanaugh infuriated me” and that she “tweeted w/o thinking my choice of words would be enraging to black women who doubly suffer, both by being women and by being black.”

The too brief investigation of allegations against Kavanaugh infuriated me. Angrily I tweeted w/o thinking my choice of words would be enraging to black women who doubly suffer, both by being women and by being black. I am an ally and stand with you; always have. And I apologize.

But people were not feeling her apology and her erasure of black women’s experience.

Nah. This apology don’t get it. I’m a big fan of your work @bettemidler but this will not do. Black women exist. They are treated like niggers. You are not. You have never been treated like a nigger. Trust. Please stop erasing black women. Thank you. https://t.co/2mA5mMxvaV

@BetteMidler I see you have decided to double-down on this insensitive, ridiculous madness. Your arrogance and deliberate disregard for the experiences of Black women and by extension The Black community as a whole is breath-taking. Your privilege is showing! https://t.co/yUNGB69WUx

Damn. @BetteMidler had to go get herself canceled in October, of all the months?? I haven't even gotten to watch Hocus Pocus yet, this Fall.

Midler landed in deleted-tweet-land in 2016 as well, when she made a transphobic joke about Caitlyn Jenner.