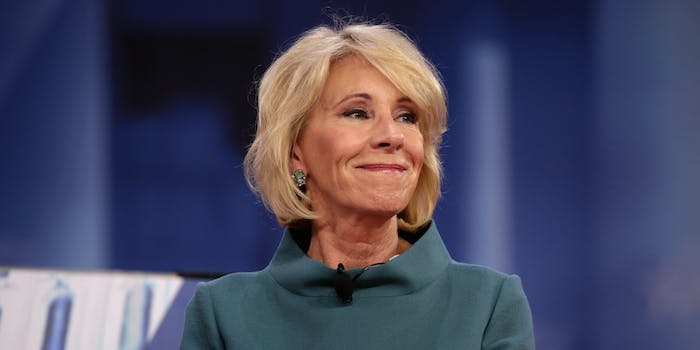 She stumbled on '60 Minutes' last night.

During DeVos’ 60 Minutes interview with CBS correspondent Lesley Stahl, Stahl asked the education secretary if she thought, in any way, she was suggesting that the “number of false accusations are as high as the number of actual rapes or assaults.”

DeVos hedged her answer, standing with survivors of sexual assault before doubling down her longstanding commitment to college men and their parents who say they were falsely accused of sexually assaulting women.

When pushed by Stahl to answer if the numbers between false accusations and assaults were the same, however, DeVos said she didn’t know.

“I don’t know, I don’t know. But I’m committed to a process that’s fair for everyone involved,” she stated.

As far as being “fair for everyone ” is concerned, the general research-supported estimate of false reports of sexual assault is 2 to 10 percent, and according to the National Registry of Exonerations, men falsely accused of rape rarely face consequences. A national study conducted by the Justice Department revealed that one in five women, 21 percent, are sexually assaulted during their time attending college. And out of every 1,000 instances of rape, only 310 are reported to police. Of those, 57 lead to an arrest, 11 are referred to prosecutors, and 7 cases lead to a felony conviction. Of these 1,000 rapes, 0.6 percent of rapists will be incarcerated.

DeVos’ answer follows her decision in September to rescind an Obama-era policy requiring college campuses to investigate reports of sexual assault with a low preponderance of evidence under Title IX. At the time, DeVos announced that her reasoning resulted from meeting with college-aged men and their mothers who said they had been falsely accused of sexual assault or harassment on their college campuses and faced harsh discipline without being allowed the opportunity to face their accusers—one of the policies DeVos stripped away last fall.

Campus sexual assault advocates lambasted DeVos’ rescinding of the “Dear Colleague” letter, saying it showed DeVos’ commitment to rapists over rape survivors. Supporters of the Obama-era policy said it raised protections for survivors and allowed people who reported being sexually assaulted by a classmate to change campus housing facilities and their class schedules for their safety. Several survivors’ rights groups have since sued DeVos over her decision.

Later in the interview, in a question about the months-long Me Too movement against sexual harassment and assault carried out by men in positions of power, Stahl asked DeVos if she had ever previously encountered such behavior.

“I can recall a number of moments in the past of several decades ago that I think today would just be viewed as unacceptable, yeah,” DeVos said.

"Are you…suggesting that the number of false accusations are as high as the number of actual rapes or assaults?" Lesley Stahl asks Secretary DeVos about her controversial changes to Title IX guidelines on campus sexual assault. pic.twitter.com/enegEWhKBy