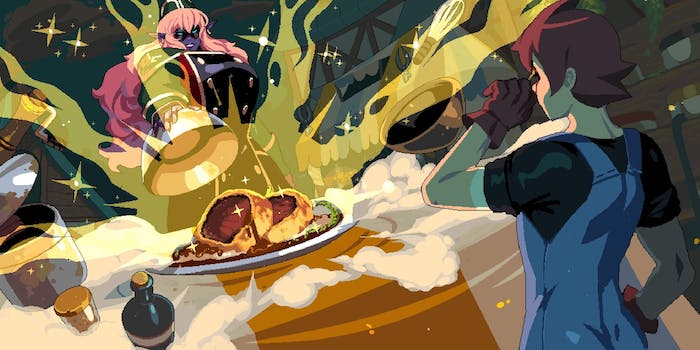 Fight through a lewd dungeon or get eaten by a queer monster.

Here are the qualifying rules for our best-of list. All games:

A Harmless Bite follows Vienna (he/him pronouns), a queer boy with a fetish for supernatural creatures. As it turns out, a cryptic named Coccolare (ze/zir pronouns) fills just the niche, complete with zir very own ravenous hunger for human flesh. But there’s a catch: Coccolare’s bite doesn’t cause lasting harm, no matter how much ze devours. Short but sweet, A Harmless Bite offers a fantastic metaphor for queer desire. And if you’re into hard vore, it’s a must-play.

Roguelike fans, have you ever wanted a dungeon crawler that was a little sexier? Valkyrie Dungeon R (Ryona) is your answer.

Developed by GeloKaiser, Valkyrie Dungeon R is based on a low-resolution dungeon crawling video game mirroring classic, top-down fantasy games. Valkyrie Dungeon R takes the series in a different direction with lewd illustrations shown after defeat. Players can choose from three main characters, and additional features are on the way, including chiptune music, a CGI gallery, more adult illustrations, and additional enemies. The game is simple and straightforward, but the levels are randomly generated every time, so no two playthroughs are alike.

While Custom Order Maid 3D 2 is available on Steam, Valve’s version is censored. We suggest purchasing the game through Nutaku or publisher S-Court. If you have reservations about supporting the Nutaku’s controversial parent company, MindGeek, you can pick up the game on Steam and get the 18+ patch from S-Court’s storefront for an extra $5.

Team Nimbus is one of the most popular NSFW Patreon creators for a reason. Its upcoming game Cloud Meadow is an incredibly ambitious monster breeding title. Think Stardew Valley meets Fakku, and you’ve got a pretty good idea of what you’re getting into.

In Cloud Meadow, players star as frontiersmen tasked with improving their town’s farm. As it turns out, this includes venturing out into the wild, breeding monsters with each other on your farm, and having plenty of sex. Monster species range from catboys and catgirls to harpies, centaurs, demons, and dragons, among many others. The game openly flaunts its queer pairing options, too, letting players hook up with whoever they please, regardless of gender and pronouns used.

While Cloud Meadow is still in active development, the game’s beta is available publicly. Team Nimbus’ Patreon also offers direct access to the games’ most recent builds, along with other various goodies.

Uragoner is the newest release to make this list, which is not an easy feat in its own right. But this debut game from Uragon Games is making waves for its unique take on both anime dating sims and side-scrolling combat.

Uragoner casts players as an administrator for a private security firm in 2069’s cyberpunk dystopian future (nice). Players recruit mercenaries, or “custodians,” and take them into turn-based, tactical combat. Each character has their own personality and inventory, and if they’re killed in combat, they’ll stay dead. Keeping your team alive is a primary concern for one reason in particular: Your mercenaries are adorable anime girls. During off-hours, you can go on dates with them, bond, and even sleep together.

While Uragoner is still very early in development, its creators tease an early build is in the works and will launch “soon.” For more information, head on over to the game’s Patreon.