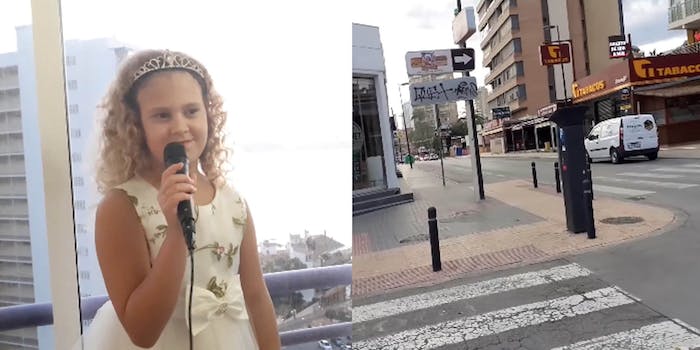 'The child should be stopped immediately,' one resident said of Deborah who wanders around her empty city daily to film.

An 8-year-old YouTuber in Spain has caused quite the controversy after posting a series of videos in which she goes around town filming the empty streets while her city is on lockdown due to the coronavirus outbreak.

Lockdown in Spain has been more intense than in most parts of the world, with people only allowed to leave their homes to buy food or medicine, or go to work if they must—not even walking around outside is allowed.

But a young kid named Deborah in Benidorm, Spain, has flouted those rules, angering some of her neighbors who even went so far as to call for her and her parents to be arrested.

So far, Deborah has posted over 20 lockdown-related videos to her YouTube channel, highlighting the eerily empty and quiet streets of Benidorm. It’s a fascinating glimpse into the uncanny world we’ve fallen into, but it’s also a blatant disregard for the lockdown orders across the country.

A state of emergency has been in effect in Spain since March 14, as the numbers began skyrocketing, causing the death rate in the country to surpass China’s reported numbers in late March. At this time, Spain has lost over 23,000 people to COVID-19 out of 220,000 confirmed cases—roughly a 10% death rate.

While Spain has begun to contain the spread of the disease, people are still concerned that disregarding lockdown rules—and doing so in such a public manner—will have adverse effects.

“This is atrocious, the police need to take action against the parents, who the bloody hell do they think they are walking and filming the streets of Benidorm, we are on lockdown for a reason to save lives and stop the spread of Covid-19 and we have the likes of this kid going out and filming for vanity?” one Benidorm resident named Andy Waddell told Euro Weekly News.

Meanwhile, Rob McFagan insisted that “the child should be stopped immediately and (she) and her parents should be banged up in a cell until the lockdown is over.”

Still others have come out in support of Deborah, feeling that a single child walking around the streets isn’t going to bring any harm to anyone.

“You adults have nothing better to do than reporting to the police when there is a child trying to be proactive on lockdown cause she is bored,” wrote Gary Lord. “As there is nobody on the streets and nowhere, how can she put others at risk?”

There are even reports that the controversy surrounding Deborah’s videos has drawn the attention of producers from Britain’s Got Talent.

Fortunately for Deborah, any potential legal troubles over her videos will soon be irrelevant, as Spain plans to lift some of the restrictions on children starting Monday. Kids under the age of 14 will be allowed to go outside once a day between the hours of 9am and 9pm. It’s still incredibly strict, but after most children have been locked indoors for the past six weeks, the news comes as a sincere relief to parents and kids alike.

But with only the occasional child wandering around Benidorm, Deborah’s videos may, somehow, become even eerier than they ever were with the streets completely empty.