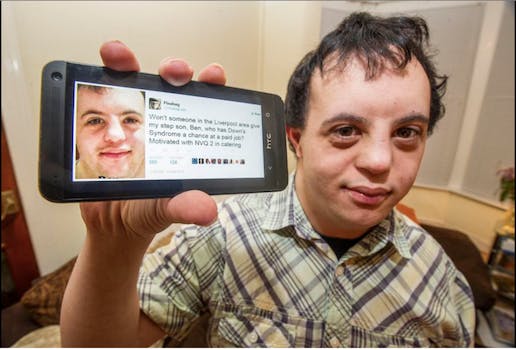 Mom starts #GiveBenAJob hashtag for son with Down Syndrome

Like most moms, Fiona Hodge just wants to help her disabled son, Ben Small, find a way to support himself. But because he has Down’s Syndrome, it’s difficult for him to find work. So the frustrated mom from Liverpool, U.K. sent the following tweet a few days ago:

Won't someone in the Liverpool area give my step son, Ben, who has Down's Syndrome a chance at a paid job? Motivated with NVQ 2 in catering

Hodge’s tweet soon went viral, thanks to a push from prominent musician and comedian Boothby Graffoe. He tweeted a message of support for Ben, followed by the hashtag #GiveBenAJob.

(“NVQ,” by the way, stands for National Vocational Qualification, a work awards system for demonstrating competency in niche industries in the U.K.)

Although Ben has previously worked for companies like McDonalds and the popular U.K. pub chain Wetherspoons, he’s never earned a regular, full-time wage. But the #GiveBenAJob hashtag campaign could easily change that. So far, it’s been retweeted more than 700 times around the country.

As of today, Small has entertained job offers from an area hotel and an unnamed employer in California, though the most promising offers so far are from “Wilson’s Kitchen, a family business in Derby Lane, Costa in the Liverpool Royal Hospital and a school for autism in Huyton,” Hodge told Buzzfeed.

Her son would “love to be a baker – but in fairness he’d do any job.” In the meantime, #GiveBenAJob continues to gain traction on an international level: