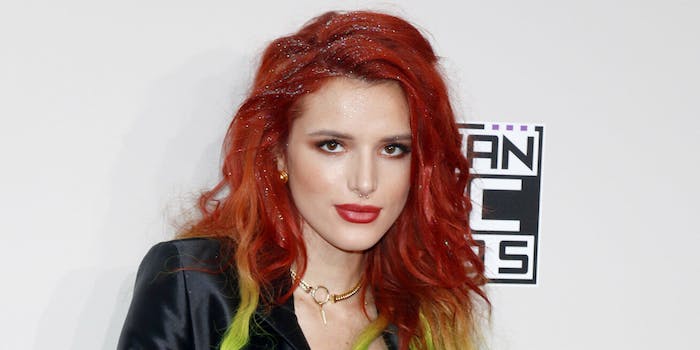 Thorne released 'Her & Him' this year.

The company, which describes itself as “the premier online destination for adult entertainment,” announced in a press release Thursday that Thorne will be receiving the Vision Award for her work on Her & Him. Thorne will receive the award at Pornhub’s second annual award show, set to take place on Oct. 11.

Her & Him, which was released earlier this year, depicts the intensifying sexual relationship between a couple. Well-known adult film stars Abella Danger and Small Hands star, with featured music from Mod Sun. The film caught the attention of people all over the web, particularly thanks to Thorne’s involvement. The 21-year-old former Disney star already has some weight behind her name, something that is unlikely to change now that she can add the Vision Award to her list of accomplishments.

In response to learning she would receive the award, Thorne said she was “honored.”

“I’m excited for visions of beauty like this to be shed in a new light. Breaking the taboo of what’s classified as beautiful has always been a vision of mine,” she said in a press release. “And it brings me such joy to see this being recognized for what it truly is… beautiful visionary art.”