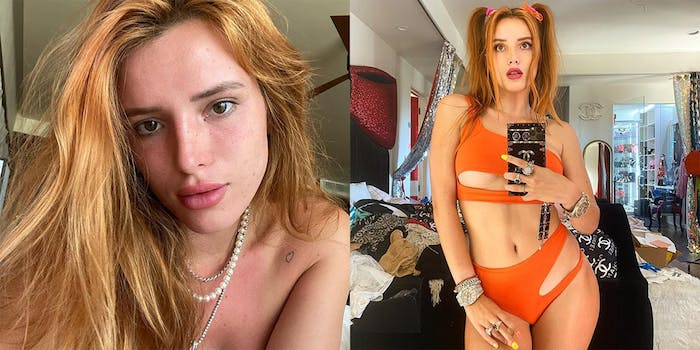 She says she won't be sharing nudes on the site.

After a $2 million OnlyFans debut last week, former Disney star Bella Thorne is getting backlash online from sex workers who say she has ruined the subscription-based platform for them.

OnlyFans has garnered popularity since the start of the pandemic, especially after plugs from Beyoncé and other celebrities, including Cardi B and Black Chyna who have also joined the platform. While these changes have brought some great press to the platform, those who use it as their primary source of income are less excited.

Critics are calling out Thorne for “scamming” users over promised nudes that will probably not be delivered since she announced that she will not be doing nudity in a tweet on Tuesday. Thorne’s presence has allegedly caused some changes to the way creators on the platform get paid, which include longer payout periods and new maximum tip amounts. (OnlyFans did not immediately respond to the Daily Dot’s request for comment.)

In an interview with the Los Angeles Times, Thorne said her OnlyFans venture is partially prep work for a new movie with The Florida Project and Tangerine director Sean Baker.

“It’s a feature we are researching as I’m living it currently,” Thorne told the Times. “What are the ins and outs? What does a platform like this do to its users? … You can be me, or this talented girl from Montana, and OnlyFans could change your life—if you want it to, of course.”

Thorne is also facing critique for exploiting the platform as an “experiment” while some longtime sex workers on the platform are struggling to pay rent.

Thorne said she plans to use the money toward her production company and charity, though specifics on which charities were not mentioned.