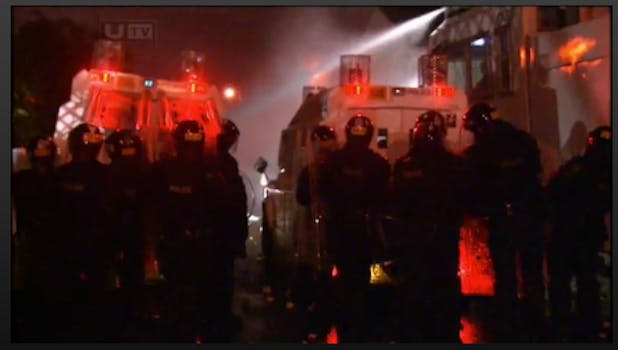 Two teens who participated in riots in Carlisle Circus, Belfast, have been banned from social networking after it came out that the event was arranged via Facebook.

Lawyers said rioters used the social networking site to coordinate and plan the disturbances, which rocked the northern Belfast neighborhood of Carlisle Circus.  More than 60 police officers were injured over three nights of sectarian violence, reports the Belfast Telegraph.

Three men and two teenagers (who are 15 and 17 years old, respectively), appeared in court Wednesday under suspicion of riotous behavior. They were all charged with “riotous assembly,” according to BBC News. The three adults, who are over 18-years-old, did not seek bail and will remain in custody until their next hearing later this month.

Declan Quinn, a lawyer for the 17-year-old boy, told a Belfast Youth Court that a number of teenagers attended the riots after planning arrangements on Facebook. The teenager, whose name can’t be released due to his age, admitted that he threw bricks during the attacks.

“These things go on Facebook, they all talk to each other, they get excited, and they end up down at a place they definitely shouldn’t be,” said Quinn.

Despite opposition from the police, the teenagers were granted bail by a district judge. They are barred from using social media, are under night-time curfews and electronic monitoring, and can not go within 500 meters of Carlisle Circus, where the attacks happened.

The district court judge told the 15-year-old he resisted an urge to make an example of him.

“Tempted as we are to make an example of you so that [you] can go out on Facebook, we are going to give you a chance,” said the judge. “If you receive a message from any of your friends or anybody you don’t know saying there’s rioting going on, you ignore it.”