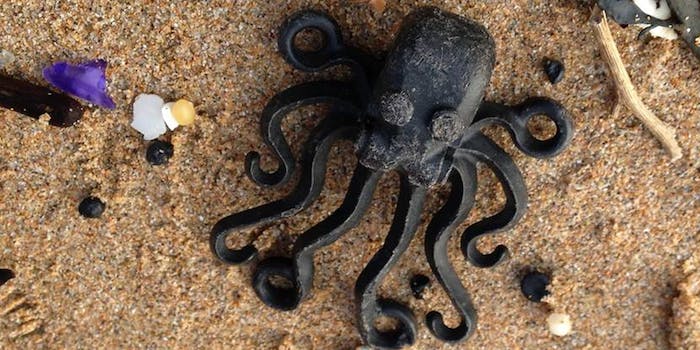 Seventeen years after falling into the ocean, these plastic bits have found terra firma.

Back in 1997, nearly 5 million pieces of Lego were lost when an enormous rogue wave hit a cargo ship called the Tokio Express, washing dozens of containers overboard. Ever since, these bits of plastic have been washing ashore, mostly on the beaches of the British Isles.

Tracey Williams first started finding the errant Lego near her South Devon home in the late 1990s and continues to dig up the iconic playthings in Newquay. Last fall established the Facebook page Lego Lost at Sea, where people can follow salvage efforts or log their own finds. Many are tickled by the project, and so far more than 35,000 users have “liked” the group.

“Obviously it’s difficult to work out how many pieces have been recovered so far,” Williams, a writer, told the Daily Dot via email, “but I would guess thousands rather than millions. There’s an awful lot out there still to be found! I suspect there are large quantities still lying on the seabed.”

In an amusing coincidence, many of the Lego come from sets with aquatic themes, including Divers, Aquazone, Aquanauts, and Pirates, Williams said. Interspersed with the flippers and rigging are WildWest, RoboForce, TimeCruisers, Outback, Police, and Fright Knight pieces—the last of which accounts for the dragons. Some 350,000 flowers are also in the mix.

“Most of the pieces lost aren’t bricks,” Williams explained, but “scuba tanks, sea grass, spear guns, etc., and the occasional dragon or octopus, so people are not building things as such.” Still, “a few artists are including them in their work. One is Jo Atherton of Flotsam Weaving, who weaves tapestries from debris collected from the beach to raise awareness of marine pollution.”

Other Lego may have traveled much farther in the 17 years since they went missing: The BBC reports that Williams has “received an email from someone in Melbourne who found a flipper which they think could be from the Tokio Express spillage.” So the next time you’re building a sandcastle, feel around for some plastic detritus—you might pull out the crowning touch.