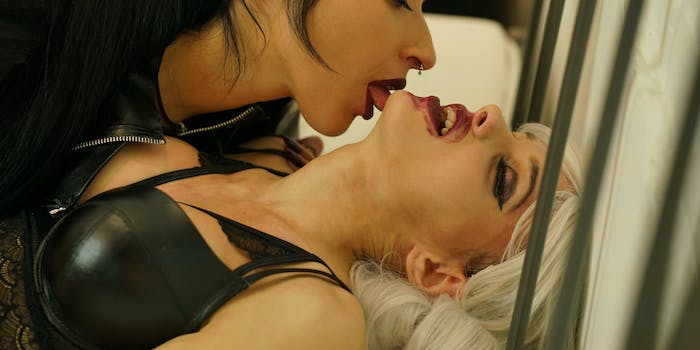 The work’s findings rely on interpretative phenomenological analysis, a research approach that studies and examines “an individual’s personal perception or account of an event or state” instead of “attempting to produce an objective record of the event or state itself,” as the Birkbeck University of London notes.

The authors’ research pool consists of 12 queer participants, including queer people of color, people with disabilities, and transgender and nonconforming respondents. The interviewees reported that their involvement in kink and the LGBTQ community contributed “a source of great connectedness and solidarity in their lives,” serving as a “protective buffer against the discrimination they faced in other realms of their lives.”

“Participants viewed the kink community as a place where they were free to safely nurture and explore their desires without heteronormative judgment,” Speciale and Khambatta write. “Through the practice of open communication, consent, and negotiation, participants cited that kink helped to affirm their sexual identities and witness diverse forms of sexual expression.”

“So BDSM is violent, but it’s not structural violence. It’s a framework that can be manipulated to abuse but is not inherently abusive unless it intersects with other matrices of power, and EVEN THEN it’s not abusive as long as the individuals are mindful of those dynamics and communicating, consenting, etc,” Snow said. “Like with clients, from a basic bitch analysis, they’re in power because they have the economic privilege to book me, they’re typically cishet men so physically larger, they’re typically older than I am, etc. But if I breach their consent then despite the ~power dynamics~ I could become the abuser.”

While “kink critical” spaces may be spreading misinformation online, the kink community does still have its fair share of legitimate problems for marginalized participants. Offline, cisgender and heterosexual kink spaces are far more prominent than queer ones, and these communities generally prioritize straight, cis men’s pleasure first, Speciale and Khambatta’s participants said. The study also identifies how queer kink spaces “are not immune from boundary violations” and how “members sometimes felt compelled to stay quiet about consent violations” due to stigma from the outside world.

Additionally, kink spaces can reflect the biases and bigotries of the outside world. Speciale and Khambatta’s study notes, for example, how many kink spaces are not accessible for kinksters with disabilities. Likewise, kinksters of color experience “nonconsensual imbalances of power, exotification, and racism” in kink spaces, the authors note.

“Most importantly, the findings illustrate that belonging to and participating in the kink community is beneficial to the wellbeing of gender- and sexually-diverse clients,” Speciale and Khambatta write. “The theme of community connectedness demonstrates the profound meanings the participants ascribed to their membership in the kink community, which provided several benefits to their self-acceptance, sexual health and wellness, and personal development.”

The Daily Dot reached out to Speciale and Khambatta and will update this report with their comments.

“It’s important to note that our participants found respite from this discrimination within the kink community, further attesting to the protective benefits of participating in kink and identifying with the kink community,” the authors told the Daily Dot.

For example, the authors found their participants experienced “great therapeutic value” in reenacting “scenes of subjugation on their own terms, with clear and open consent, and with partners who listened to and deeply respected their emotional needs.”

The authors also identified parts of both the feminist and queer communities that “have adopted a kinkphobic lens,” which the authors believe originates “from misinformation, lack of personal involvement with practicing kinksters, and simplistic views on consent.”

“Our study gives direct evidence to the contrary, most notably in our findings that kink spaces can be powerful sites of empowerment, healing, and safety for women, as well as people with other marginalized identities,” they said.