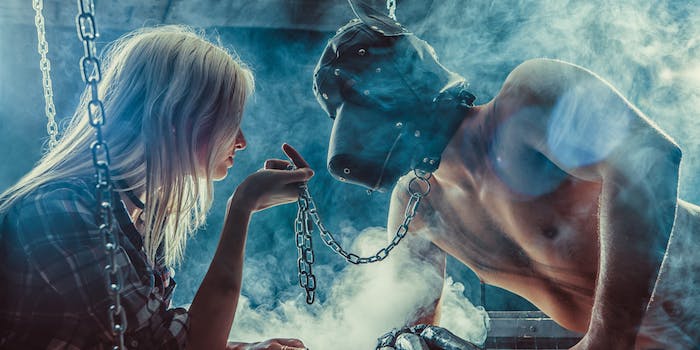 No, masks are not the same as gags and blindfolds.

On Twitter, critics find the image hysterical for essentially “threatening” the viewer with a good time.

Similar comments blew up across social media, effectively cementing the fact that, yes, the right has once again threatened the left with kink.

The coronavirus-themed meme shared by Cursed Conspiraboomer Images seems to originate from a conservative account on Instagram called @Weaponizing_Truth. The image was posted to the account in April and recalls other memes that claimed face masks are part of a government conspiracy to implement Sharia, or Islamic, law.

Other times, the right threatens the left with the very things they’re asking for. When police threatened to abandon their jobs, the left cheered on the idea. In late August, Bette Midler goaded Senator Tim Scott (R-S.C.) for saying Joe Biden wants a “socialist utopia,” which Midler found to be a pretty nice idea. And earlier this week, sci-fi author John Scalzi said the Ohio Republican Party was “threatening [him] with a good time” after sending him an ad warning him of “open borders” and the “green new deal” under a supposed Biden administration.

Scalzi’s followers reminded him that there’s a long history of the right threatening Americans with a good time: In 2016, the founder of Latinos for Trump warned that without Trump, America would see “taco trucks on every corner.”

“Are you still getting a taco truck on every corner?” one fan asked Scalzi. “Or is that too far left these days?”

The takeaway? Everyone should wear a mask. It’s guaranteed to cause a good time.