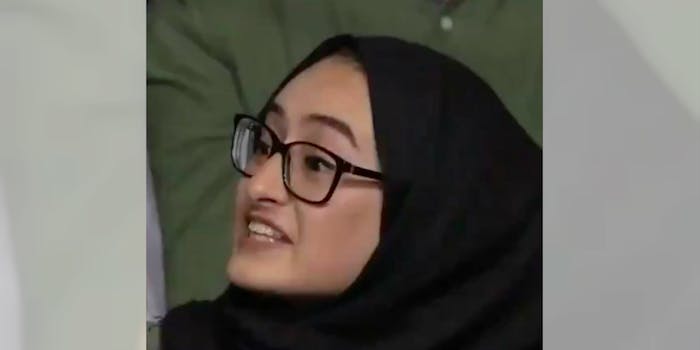 'It's funny that you're a white man saying that.'

On the most recent episode of BBC debate show Question Time, a woman called out a white man after he said the United Kingdom is “one of the least racist societies across Europe” the Daily Express reports.

A now-viral clip from shows Question Time guest George the Poet saying he’d faced racist incidents as a Black man living in the U.K., including being randomly stopped by the police because of the color of his skin.

A white man, who was a member of the audience, disagreed with George and insisted that the U.K. is the “least racist society in Europe.”

Another member of the audience, a woman wearing a hijab, fired back. “It’s funny that you’re a white man saying that,” she said. “It’s actually hilarious.”

''The UK is one of the least racist societies across Europe"

The woman continued: “You’re a white man saying there’s no racism in this country! How are you going to experience it?”

People in the audience murmured, with some telling her that she is “racist” and to “calm down.”

She responded, “You’re not the one walking down the street and being screamed at. You’re not a young Black man walking across the street being stopped by police. Don’t tell me to calm down.”

Preach sister! He used all the usual tricks to shut her up. Including the ‘calm down’ tactic that tries to paint articulate passion as hysteria, especially when it’s a woman https://t.co/XdvdoOcuiN

Big ups to sis who told this seasonless chicken about himself but at the same time this racism debate is boring. The UK’s biggest export is racism. https://t.co/KR2rx0Akqu

I HATE when white people sudddenly become experts about racism and try to deminish the impact it has had, and is currently having on the black community. Don't dictate a converstaion that you've had no experience of. #bbcqt

Some, however, said the white man should be able to express his views and accused the woman of racism.

This young man is just trying to put forward his own positive view of the U.K. He’s complacent and smug and completely unaware of the issues probably listens to music radio in the morning and reads a mail group newspaper on his way to the city.

That's racist, she's saying he isn't entitled to an opinion coz he is a white man, Can you imagine the outrage if that comment was made the other way?

As the Daily Express notes, the argument in the show came after Prime Minister Theresa May’s commitment to end free movement of European Union citizens in the U.K. with post-Brexit policy.