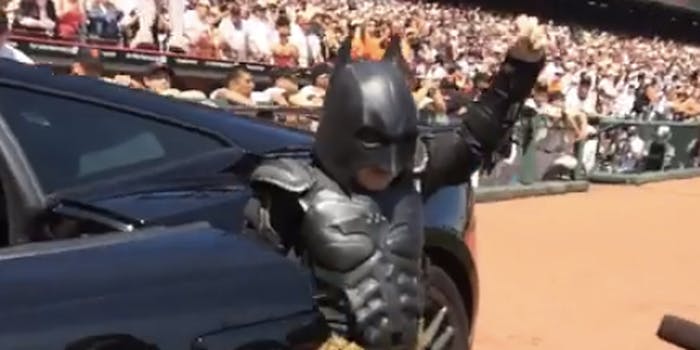 Evil doesn’t stand a chance against his fastball.

A true superhero’s work is never done, and nobody knows that better than San Francisco’s Batkid, a.k.a. 5-year-old leukemia survivor Miles Scott. After saving the metropolis from supervillainy last fall, the fearless vigilante donned his cape and cowl once again to kick off opening day at the Giants’ AT&T Park by throwing the season’s first pitch.

Perhaps thinking the Batmobile a tad ostentatious for the occasion, Batkid arrived in a modified Porsche that bore his familiar logo. (Now if only he could do something about the sudden rash of Smart car tipping that has the city’s eco-conscious drivers scratching their heads.)

Batkid was then escorted to the mound by starting pitcher Matt Cain, who posed for a few more photos after the pint-sized crusader hurled his best heater.

Matt Cain and #BatKid and oh my heart, this is the cutest photo ever. (Thanks, Michael Macor!) pic.twitter.com/emqfo0gWui

All in all, just another day’s work for Batkid, who at this point could probably win a mayoral election if not for those pesky age restrictions. Just as well: we feel a lot safer with him patrolling our streets and sports stadiums.