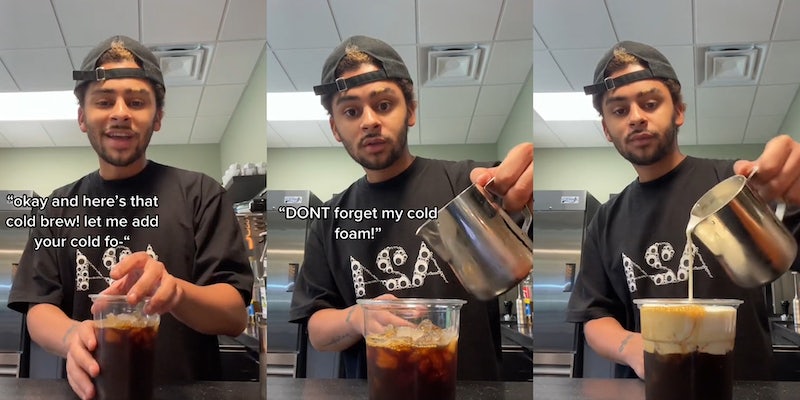 ‘It happens daily’: Barista blasts impatient customers who ask for cold foam as he’s pouring it

'Don’t ask me to do something I was already planning on doing.'

A barista is going viral on TikTok after uploading a routine customer experience he has while making drinks that have cold foam in them, a popular addition to beverages that are offered by tons of coffee shops, including Seattle-based mega-chain Starbucks.

Marquise Maynelle (@maarquisse) said in a caption for the popular clip which garnered over 100,000 likes on the social media platform that “it happens daily.” Several other baristas in the comments section said that they’ve experienced the same type of anxious request from patrons that they’ve served as well.

The video begins with Marquise setting down a cup of cold brew, iced coffee with a text overlay that reads, “okay and here’s that cold brew! let me add your cold fo-“

The barista then starts adding the foam to the cup before another text overlay, meant to represent an interjecting customer comes up on screen. “DONT forget my cold foam!” it reads.

Marquise adds the foam to the drink, which he was in the middle of doing in the video before the customer reminded him not to pour it in their cup. He then gives the customer a glare before walking off camera.

Tons of commenters began leaving remarks on Marquise’s video, adding their own examples of impatient customers or folks frequenting the stores they worked at who just jumped to conclusions.

“THATS NOT SOY MY DRINK IS SUPPOSED TO HAVE SOY. ‘Yeah well this isn’t yours soooo,'” one user offered.

“‘Is this my mocha’ sir i yelled out pink drink for jessica,” a third added.

Several users said these kinds of customers made their jobs much more difficult and less enjoyable.

“Being a barista ended up being so disappointing for me, because the job itself was tons of fun, but customers were BRUTAL,” one viewer said.

“Don’t ask me to do something I was already planning on doing because now I don’t wanna do it anymore,” another wrote.

Folks who worked other jobs started sharing their own stories of patrons who jumped the gun as well.

“Reminds me of my old job when people would ask for two packs of cigarettes and be like I SAID TWO not realizing I had the second in my other hand,” one shared.

The Harvard Gazette stated that “customer rage has been an unwelcome feature of post-lockdown life,” and published a piece analyzing the “spike” in angry consumer incidents against service workers. The article cited a 2021 poll of food service workers that found 39% of workers quit over concerns of customer harassment.

Harvard Business School professor Ryan W. Buell told the Gazette that folks’ behavior after being pent up indoors during the pandemic has taken a toll on their social skills and that coupled with staffing issues that many businesses are facing after the pandemic hasn’t helped matters either.

The Daily Dot has reached out to Marquise via email for further comment.