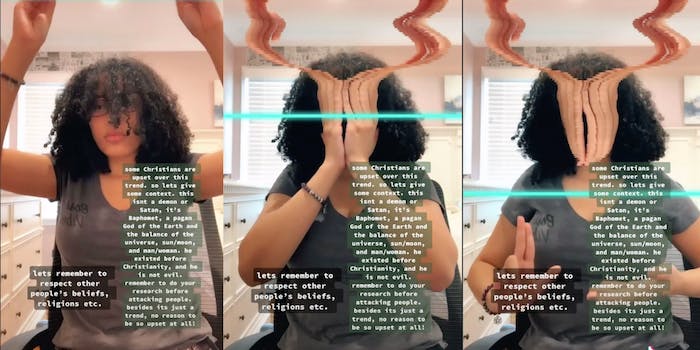 TikTok creators defend their usage of Baphomet against claims of Satanism

TikTok creators are defending their usage of the Baphomet against claims of Satanic worship, saying the horned figure derives from Paganism and is not evil, according to Distractify.

What is a Baphomet?

The Baphomet, mentioned as early as the 14th Century but drawn in 1861 by French occultist Éliphas Lévi, is “a hermaphroditic winged human figure with the head and feet of a goat that is adorned with numerous esoteric symbols,” according to Britannica. The figure became reassociated with Satanism when the Satanic Temple commissioned a statue of the figure in 2015.

TikTok creators have popularized the Baphomet on the app by using the time warp scan function to morph themselves into the figure.

What’s the Baphomet controversy on TikTok?

As others participated in the trend, some TikTok creators called out the usage of the figure, categorizing it as Satanic.

One TikTok user shared a collection of videos of individuals recreating Baphomet to spread awareness. He said “Jesus is king.” Another said, “Stop romanticizing Satan.”

Some defended the usage of the figure, saying the individual elements of the figure are symbolic of deeper meanings, such as “the pursuit of knowledge.”

In response to the Baphomet discourse, one person tweeted, “Respect religions and stop demonizing pagan deities.” Another tweeted, “He is a goat man calm down.”