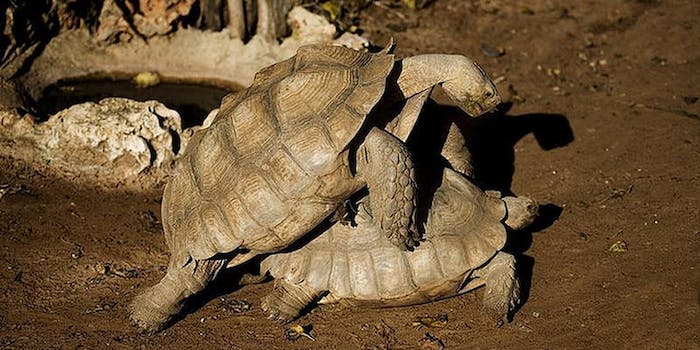 Now with a bit less sleaze.

There were all sorts of problems with naming a casual-sex-facilitation app “Bang With Friends,” as its developers found out: The tone was enough to get it pulled from the Apple store, and the proximity to popular titles like Words With Friends was enough to spark a lawsuit from game studio Zynga.

A few simple changes, though, and the service is once again available on Apple devices—now it’s simply called Down (like “down to frolic”), and its much more innuendo-based. “The anonymous, simple, fun way to find friends who are interested in you!” reads the advertising copy.

Once inside the app, you can peruse your Facebook friends and place them in one of two categories. You can elect “to hang first with your friend” by swiping a bar up top, or you can indicate “I’m Down” below, in which case the next time you meet you will instantly be having sex, presumably, without all that pointless hangout time.

Not everyone will be using this slightly subtler interface, however—Bang With Friends in its original form still exists for Android users, which is Google’s way of making Apple look like prudes. It’s also enough to keep Zynga’s lawsuit going.

In the meanwhile, though, you are now free to employ your iPhone in the ongoing quest for more orgasms, safe in the knowledge that Down is “completely private and discreet” and “will NEVER post to your Facebook wall” (ha ha, oops). Until a bored hacker gets the idea to expose everyone’s deepest desires. Enjoy!