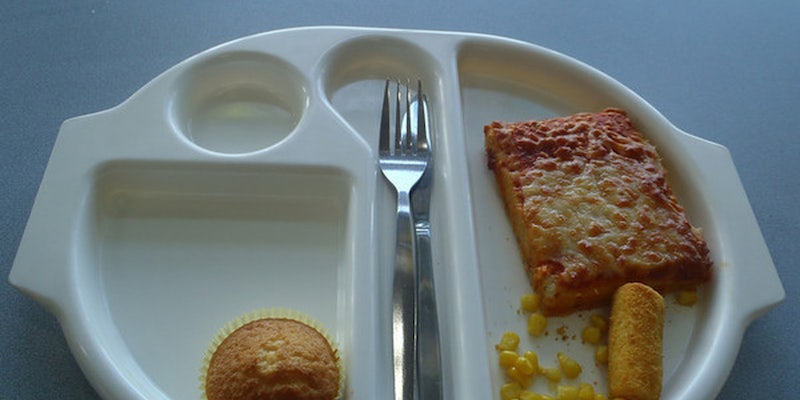 There’s no shortage of advocates fighting to make school lunches healthier and tastier. There’s also no shortage of mind-numbing blogs where people post pictures of whatever they’re eating. But one young student in the United Kingdom has combined the two in hopes of raising awareness of awful school dinners in her home country.

“NeverSeconds” is a new blog written by a nine-year-old girl nicknamed VEG (“Veritas Ex Gusto” or “truth from tasting,” her dad tells her) who attends primary school in Scotland (for our American readers, primary school is like elementary school). Today, she posted two unappetizing photos of the food she is served at school, with many more to come.

On top of that, her father, David Payne, has also taken to Twitter to alert British TV chef Jamie Oliver, a vocal proponent of healthier school dinners. Oliver has not yet responded on Twitter.

According to the Payne’s Twitter feed, the school is aware of the project and has no problem with VEG bringing a camera to school, as long as she only photographs the meals. Payne also says the blog has amassed 1,000 hits over the past four hours. While neither he nor VEG have named the specific institution she attends, it will be interesting to see if the school continues to allow her to take pictures in the wake of the blog’s popularity.

The inaugural photos paint a bleak picture of school dinners in the UK. The first meal included something resembling a cheese pizza, one small croquette (the British equivalent of a tater tot), a few stray corn kernels, and a mini-muffin. The second wasn’t much better, consisting of a cheeseburger with no toppings, a couple more croquettes, three cucumber slices, and a popsicle. According to VEG, each meal costs two British pounds (which is between $3 and $4 U.S.). At least neither of them contained any hairs, she writes.