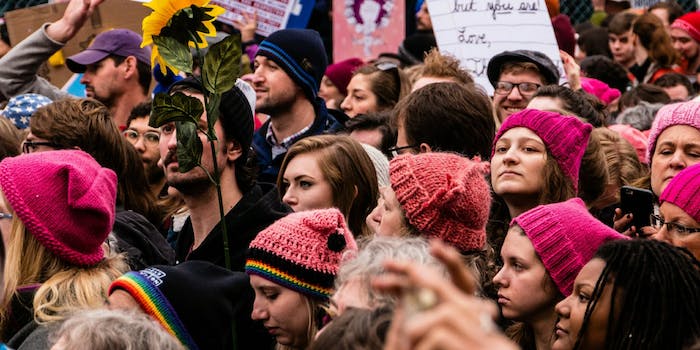 Maybe mention your mom's accomplishments other than birthing you, eh?

Or, by the looks of the way the internet is celebrating, Happy Men Performatively Thanking Women For Birthing Them Day. Or even, Happy Capitalism Parading As Feminism Day.

Yes, International Women’s Day actually has value. It’s one of the few scheduled reminders that women—particularly women of color, trans women, non-binary people, and women in underserved communities—are still underpaid, underrepresented, and undervalued across the board.

But for many men, it’s a day to celebrate the ways in which they themselves celebrate women. Instead of, you know, focusing the spotlight on women’s accomplishments and struggles themselves.

Men are here to support women, especially the ones they’re related to.

Happy #InternationalWomensDay The women in and around my life have always been my heroes. I will always be happy to support, learn from and continue to be guided by you. Your time is now. Your time is always. x

HUMANS!!! Happy #InternationalWomensDay! I am honored to have so many empowered women in my life at home and at work. Sometimes simultaneously! #MadamSecretary #IWD2018 pic.twitter.com/GPG5FDpBdy

Politicians are totally down to talk about the ways they support women! Or have helped women exist! You know, instead of highlighting women’s accomplishments.

On International Women's Day many politicians make meaningless noise about women's issues. I prefer to get on with representing them. Watch this video of me asking probing questions on women's body issues, medical abortion availability, potentially unnecessary Caesarean Sections, and GST on sanitary products. #IWD #ldpau #auspol

Posted by David Leyonhjelm, former senator for the Liberal Democrats on Wednesday, March 7, 2018

Corporations themselves are all about supporting women, too. Or, at least, promoting the ways they say they support women.

Lots of brands encouraging me to empower myself today by buying some of their stuff. #InternationalWomensDay

Men are sure to let women know that they should be happy to be the bearers of life! Because it wouldn’t be International Women’s Day without having to be cheerful at the thought of childbirth.

Or weirdly calling for men to take on the pain of childbirth themselves? Honestly, what is with y’all’s obsession with childbirth? Do people know that not all women have uteruses and that not all people with uteruses care to house a child? All I wanted was equal pay, sheesh.

Show me a guy who can handle just one day of menstruation, let alone nurture life in the stomach for nine months, and I will show you my hero. #IWD2018

And pleeeeenty of men are here to remind us (or convince us?) that women are doing much better than men. And, you know, ask for an International Men’s Day of their own (which already exists).

Nearly 50% of men think women are well represented in leadership even when only one in ten senior leaders is a woman. https://t.co/AB3zEoMpp4

If you look at the data: life expectancy, college graduation rates, PHD's awarded, average wage for those in their 20's, likelihood to go to prison etc, women are doing extremely well in America

Because women have made good choices over last 40 yrs#InternationalWomensDay pic.twitter.com/fbNHdOFWCU

And that, you know, feminism is the work of Satan, as the Bishop of San Sabastian, Spain, has so accurately claimed.

So thank you so much, men, for giving us this one day to celebrate women.

Someone posted "Happy International Women's Day to those who celebrate!" on Facebook and I can't stop laughing.

I just really want to say a humble thank you to men for giving us one day. Do you guys need anything? #InternationalWomansDay