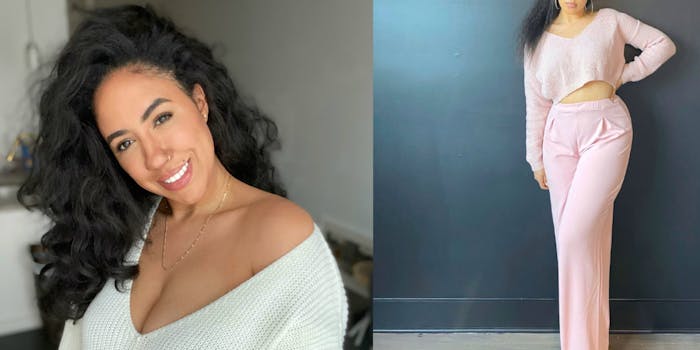 It's a lot harder than you think.

Every woman knows the supreme effort it takes to get thoroughly dolled up before leaving the house.

Between showering, shaving, makeup, hair, and clothes alone, it can take hours to feel fully prepared. Despite the struggle and the time it can take, one woman on Twitter is determined to start a new challenge. The #BadBitchForAWeekChallenge requires its participants to leave the house dressed to kill for a full week. That means hair done, nails impeccable, legs shaved, matching outfit—even matching underwear. While the challenge might seem like too much effort for some, women online can’t help but be intrigued.

A woman who goes by @CeciATL on Twitter presented the challenge to her followers late last week. “I’m gonna do an experiment where i leave the house as a bad bitch every day for a week just to go about everyday life,” she wrote. “I’m talking hair done, edges laid, makeup done, no sweatpants, a bra, hell even matching panties. just to see what the world has for me.”

Upon initially seeing the challenge, most women were unwilling to participate. While tantalizing, the #BadBitchForAWeekChallenge would require a lot of work. Even @CeciATL appeared to regret her decision when the week began and she was faced with actually taking part. She’s stood by her goal thus far all the same.

The first two days of the challenge went flawlessly. @CeciATL stuck it out for her followers. She noted that she found herself, and her closet, “extremely unprepared” to take part. Through it all, she put together a stunning outfit and left the house looking like a knockout.

Day two was similarly successful. @CeciATL crafted a polished look and headed out to greet the world. She noted in an update that the effort was worth it. “I kept getting glimpses of myself in reflective surfaces throughout the day and it was nice not seeing a frumpy sack of shit,” she wrote. We’ll have to wait until the week is over to see how else she chooses to tackle the challenge.

@CeciATV’s progress quickly inspired other women try the challenge. A slew of similar posts went up on Twitter this week, documenting other participants’ progress. Spoiler alert: They all crushed it.

Some women go through this much effort every day. Every. Single. Day. The vast majority of women were exhausted at the very thought. “I want to do bad but just reading this tweet has me exhausted,” one woman wrote. “I ain’t built for it.”

We don’t all have the resilience to take part in the #BadBitchForAWeekChallenge, but hats off to those who do. They might have to get up earlier than the rest of us, but damn do they look good.