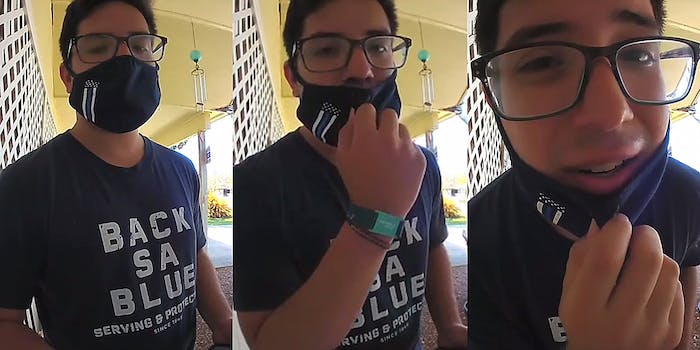 ‘You can get out’: Video shows man shutting down aggressive ‘Back the Blue’ canvasser

A viral video shows a homeowner shutting down an aggressive “Back the Blue” canvasser who exerted a lot of energy explaining why he wasn’t a solicitor, even though he clearly wasn’t welcome on the property.

The video, captured via Ring doorbell camera on Saturday, features a volunteer from the San Antonio Police Officers Association. He says he’s distributing information about an upcoming election—most likely the May 1 vote on Prop B, which, if passed, would repeal San Antonio police officers’ collective bargaining power. Unsurprisingly, the SAPOA is encouraging San Antonio residents to vote against Prop B, which it calls the “defund the police initiative.”

Although he does not indicate his political leanings during the exchange, the homeowner makes it abundantly clear that he wants nothing to do with information on the upcoming election.

“Can I help you?” he asks the canvasser, already sounding irritated.

“Hello, my name is Michael, I’m here with the San Antonio Police Department Association,” says the canvasser, wearing a “Back SA Blue” shirt. “It’s just information on the upcoming election. I could just leave it at the door. I understand you guys are busy.”

“We have a ‘No Soliciting’ sign,” the homeowner replies. “That means we don’t need any of that information. Thank you.”

A less dedicated canvasser might use this as their excuse to move on to the next house. But Michael doubles down, apparently taking umbrage at being called a solicitor.

Pulling down his “Blue Lives Matter” face mask and leaning into the camera, Michael says, “With all due respect, sir, I am not a solicitor.”

“Sir, I’m offering information [on] politics… and that is protected… the Supreme Court ruled on it, sir,” Michael says, his voice distorted and cutting out intermittently. “[I’m not] a solicitor. Please don’t mistake me as one.”

Indeed, canvassers are legally allowed to knock on doors and distribute literature on private property as long as the owner does not have a “No canvassers” or “No trespassing” sign. The First Amendment protects this kind of non-commercial speech, which distinguishes canvassing from commercial solicitation.

None of that matters to the homeowner, who tells Michael, “I don’t need any of that.”

“Don’t come back to my property,” he demands.

“I definitely won’t, but do not mistake me for a solicitor, sir,” Michael says in a last-ditch effort to defend himself. “Have a great day. It is protected by my—”

“You can get out. You can get off my property now,” the homeowner says. With this, Michael finally accepts defeat and leaves.

The viral exchange has earned more than 47,000 upvotes on Reddit’s r/PublicFreakout in the last day. It’s also racked up more than 3,000 comments, with many users slamming the canvasser for being so stubborn and aggressive.

“I like that despite stating he’d never come back and being told to fuck off in no uncertain terms he still felt the need to defend himself against the soliciting accusation,” u/Liberatedhusky wrote.

“They know that a ‘no soliciting’ sign strongly implies ‘leave me and my family the fuck alone, unless you were invited,’” u/Tarpup commented. “But because Political and Religous [sic] canvassing doesn’t count as solicitation, it’s free game to them. And they will assert and argue with you because they don’t want to use their common sense to read a no solicitation sign correctly. It’s fucking rude and petty.”