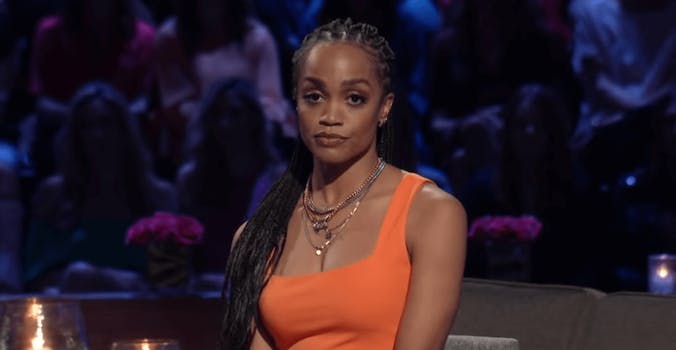 Former Bachelorette Rachel Lindsay read hateful comments the women had been receiving to the audience.

With this season of The Bachelor rolling slowly to an end, we were treated to what every loyal member of Bachelor Nation looks forward to the most every season—the “Women Tell All” episode. But this season’s tell-all took an unexpectedly serious turn.

Just before the finale every season, the women reunite to dish on the behind-the-scenes. It’s our chance to hear some of the stories behind the moments we got to see on TV, as well as see how the ladies are doing now that they’ve gotten some space away from the house and everything the Bachelor entails. On Monday night, former Bachelorette Rachel Lindsay joined the group to lead a discussion about how out of control the social media hate against the contestants has gotten.

Lindsay first joined the franchise as one of the women competing for Nick Viall’s heart in season 21. A fan favorite, she went on to become the series’ first Black Bachelorette in season 13 of the spin-off.

But her unique position as the only Black person to take the titular role of either Bachelor or Bachelorette on the franchise so far came at a price.

“When I was asked to be the Bachelorette, I knew it would be hard,” she told host Chris Harrison last night. “I knew I would get even more hate and criticism. But I wanted to pave a way for women who look like me who hadn’t been represented in this role on this show.”

The conversation becomes even more sobering as she admits she feels like that effort was in vain “because [the hate and criticism] seems to be getting so much worse.”

With the rise of social media, the conversation about cruel comments directed at celebrities, and particularly at stars of reality shows who are so suddenly thrust into the spotlight, has certainly been an ongoing one. But as Lindsay pointed out, it isn’t one that seems to be going anywhere. Anonymity and access give online trolls the idea that they not only can, but should say whatever awful thing they want, for no perceivable reason other than being able to do it, and without repercussion.

In an attempt to draw attention to why something needs to change, Lindsay read aloud some of the hateful messages contestants from the current season have received online.

“You’re an emotional, stupid bitch. Kill your self. You’re useless,” read one message.

Another warned one of the women: “If I ever see you, get ready to have your lawyer ready because I’m gonna fuck you up, bitch.”

Other comments veered directly into racism and racist slurs, and Lindsay clearly struggled over having to read them out loud.

But as absolutely terrible as these comments are, it’s important to remember that this is just a small sampling. And there are many more just like them.

While The Bachelor has never addressed the issue of online harassment quite in this fashion before, it’s unlikely to be a coincidence that it comes only weeks after former Love Island host Caroline Flack committed suicide, something many have attributed to the persistent stream of hate and mockery she received from both social media and the actual media.

Flack’s death served as a horrific reminder that what we say from the safe shield of a computer screen has a real impact on other people, even though it should never have to get to that point for people to consider the consequences of their actions. All the same, The Bachelor clearly intends for this to be a conversation we continue having, with an aim to call out and ideally put a stop to all this unnecessary online hate.

Whether or not we’re willing to reckon with what it means to use social media responsibly and thoughtfully is a question that ultimately goes far beyond the scope of this one franchise, but it’s still important that we keep asking.