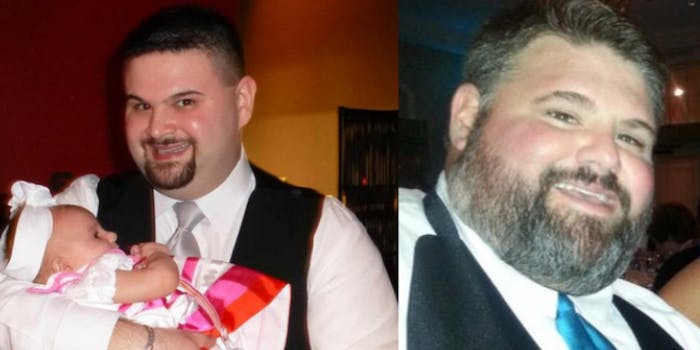 He better offer to pay for the groom's lap dances.

There’s nothing quite as awkward as stepping into a party full of strangers. But in a matter of days, Joey DiJulio will be flying from Seattle to Philadelphia to attend a bachelor party for Jeff Minetti, a man he’s never met. While this sounds like a social anxiety nightmare for most, it seems like DiJulio is actually looking forward to kicking it with the boys.

It all started with an email chain. According to Q13 FOX News, DiJulio received an email on Feb. 11 reading:

Has anyone else noticed now that Jeff has been rocking the beard for a while – he looks like a middle aged Pavarotti? At times, he also has ventured into a bit of hipster phase. In addition to publicly questioning his fashion choices, his bachelor party will be a good time for us to celebrate him leading up to his wedding.

Oh, Jeff! You’re so wacky with your hipster clothes and facial hair! Everyone who knows you knows that.

But the trouble was, DiJulio didn’t know Jeff, or any of his friends. Eventually, he realized that he must have been accidentally included on the bachelor party email thread. But rather than let the author of the email know that he had made a typo, as most of us would do, DiJulio continued to receive updates about the party. It wasn’t until Minetti’s brother asked the email thread for a final RSVP that DiJulio finally came clean.

He emailed the group of guys:

So, I have no idea who any of you guys are, but I have been enjoying being a fly on the wall hearing about the plans for this bachelor party over the last few months.

I’m assuming my E-Mail address was added to the list by mistake (perhaps a typo of someone else?).

I live out in Seattle, WA and although for a moment I thought it might be funny to just show up and be that guy nobody knows but everyone wonders “who is that guy?”, buying a plane ticket for a cross-country flight just to crash a bachelor’s party might be a bit over the top (although it would be epic!).

Nonetheless, I do hope you guys have a great time and I’d like to take a moment to wish the best of luck in life to the groom!

The bros planning Minetti’s bachelor party thought DiJulio’s email was hilarious. So instead of getting angry with him for reading the group’s private emails, after some extensive Facebook-stalking the boys offered to chip in to buy DiJulio a ticket from Seattle to Philly for the bachelor party. Minetti even invited him to the wedding and said DiJulio could be his best man.

The craziest thing about this story? It looks like DiJulio is actually taking up the bros on their offer. He started a GoFundMe campaign to raise money for the trip. (The campaign is fittingly called “Bachelor Party 4 Guy I’ve Never Met.”) After reaching his initial goal in less than a day, he now plans on giving the leftover funds to Mr. and Mrs. Minetti for their honeymoon.

Who knew a wrong email address could result in such a heartwarming adventure? This story definitely needs to have a bro-y movie adaptation for the Spike Channel (or we could replace the bachelor party with a quinceañera, and it could air on the Disney Channel).

Does DiJulio get a plus one? Because all this generosity and good spirit sure makes me want to go.