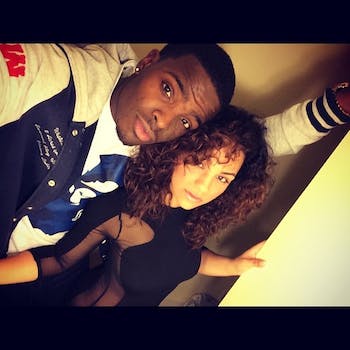 "Well, you thought this was your trip, this our trip."

Guys, don’t try this at home. Or on vacation. Or anywhere.

Azel Prather Jr. may have gotten 25 people to support his $300 crowdfunding campaign to “oversee all parties and fun activity” for his girlfriend while she enjoys spring break in Miami, but that can’t have done him any favors in the love department.

After major publications including the Washington Post covered the campaign—in which Prather declared his wish to travel to Miami in order to make sure his girlfriend didn’t cheat on him—the man uploaded an Instagram video in which he noted that she was “mad, yeah,” while she side-eyed both him and the camera.

“You thought this was your trip,” he says, in reference to her spring break vacation. “This our trip.”

“I miss my friends,” she says.

Despite what we can only imagine is his girlfriend’s frustration at being treated like an unruly pet who ran away and now needs to be kept on a leash, Prather tweeted updates from day one of the spring break vacation:

In his effort to fund the campaign, Prather blogged  about his girlfriend’s Facebook updates, which he shared publicly on the GoFundMe page.

Her bathing suit pic got 326 likes. Fellas, that right there is called the danger zone. Confidence rises and she’ll remember the time I went out with my friends instead of her. The sun being out and the tan on her beautiful skin doesn’t help the situation. If you could find it in your heart to help me save my relationship I would truly appreciate it. Next thing you know her charger might break! Help me please! Fighting for love here

Later he noted, “She clearly needs me… I can tell the Miami sun is doing exactly what I thought it would do. “

While Prather seems to have believed the South Beach weather would transmogrify his girlfriend into a philandering free spirit, it seems more likely his jealous behavior might have the opposite effect.

“Lol yu ain’t gotta do this man,” wrote Instagram user chunky__ in response to the video of the two of them reunited at last.

“I know your girl pretty and attractive,” someone else wrote, “but don’t push her away being so controlling..yu embarrassing her. She’ll either cheat or leave lol.”

Still, the 25 people who donated were confident that his campaign would conquer all. (Though to be fair, one of them only chipped in $5 because she hoped Prather’s dad would friend her on Instagram.)

My boy @Hail_Zel done made the paper again and it's not for BBall!

“This is for all the relationships that have washed away in the shores of South Beach,” snarked an anonymous donor known only as M.K.

Prather is enjoying his free drinks tonight, but maybe he should pour one out for all the relationships ruined by controlling boyfriends—or maybe just stupid Internet pranks.