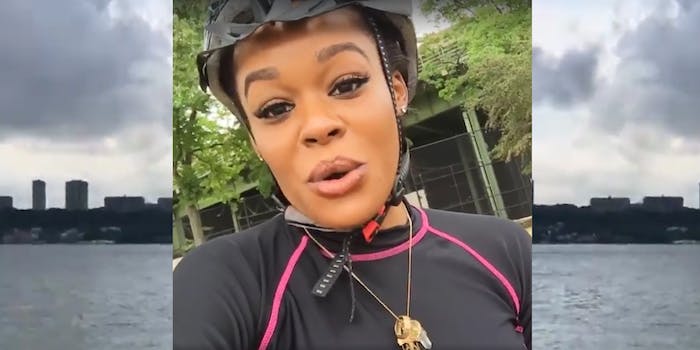 'What's the difference between getting a nose job and changing your skin color?' she asks.

Azealia Banks poses an interesting question in a recent Facebook video: What’s the big deal about a black woman lightening her skin?

Rumors appeared that Banks had lightened her skin in late June, and in a 21-minute live video posted to Facebook on July 1, Banks admits to using skin-lightening creams to change her skin color. “As black people in this world, you assimilate,” she says as an explanation.

“With being a black woman, at least for me, I can forget to be a woman, and I just get really bent up on blackness and all of these unwritten rules that come with being black.” She also asks, “What’s the difference between getting a nose job and changing your skin color? What’s the difference between wearing a hair weave and changing your skin color?”

Her questions are provoking some strong reactions. The politics of skin color is layered and complicated, and skin-lightening creams exist all over the world. But many see Banks’ skin change, and skin lightening in general, as succumbing to pressures to adhere to Euro-centric beauty standards.

“Where is the line? I can’t really say,” writes Erin White at Afropunk. “But attempting to permanently erase or lessen the appearance of literal blackness is a far cry from temporary hair extensions.”

I abhor how Azealia Banks tries to trivialise skin bleaching. It's not part of "disco fever" or "not a big deal." It's a massive deal.

Azealia Banks' skin bleaching shines a light on her own insecurities and hypocrisies.

Banks returned to Facebook yesterday to defend herself, saying she is not lightening her skin in an attempt to “look white,” and that it’s up to her what she does with her body. She also shared a comment from a supporter that further explains her choices.

Any choice we make is influenced by hundreds of factors, conscious and subconscious. Banks may have changed her skin because she likes the way it looks, but she may also like the way it looks because we’ve all been taught to value lighter skin.

“Every black woman in America navigates this terrain in her own way,” writes Driadonna Roland at Revolt. “So if you praise Nicki Minaj, a woman who noticeably manipulated her body to embody certain beauty ideals, and if you praise Solange because you think she rebels against them, then you must also accept Banks for making a decision to conform to them.”