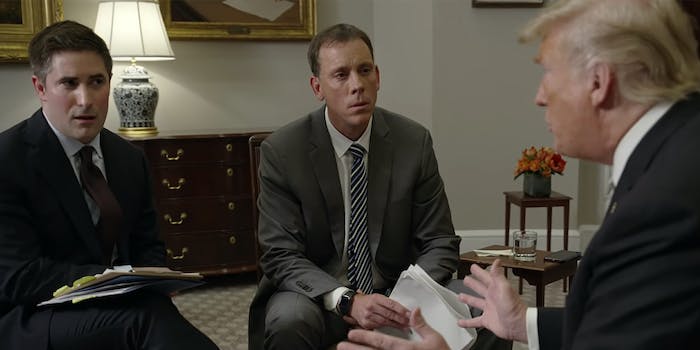 It is very unlikely Trump can end birthright citizenship.

Axios—Washington, D.C.’s most plugged-in scooplet factory—includes in all its daily email blasts an admonition: “Be Smart.”

Today’s email also came with a blaring subject line, one that shocked everyone with exactly the kind of resonating scoops Axios wants to be known for: “Exclusive: Trump to terminate birthright citizenship.” Axios reporter Jonathan Swan landed an interview with President Donald Trump, and as Trump does, he explained his latest anti-immigration intentions.

However, what’s at stake here—birthright citizenship—is one of the bedrock principles of the modern United States, enshrined in the 14th Amendment, which allows anyone who is born on U.S. soil to be automatically granted U.S. citizenship. If Trump ended it, it would radically shape the makeup of American citizenry for centuries to come, stopping America’s shifting diversity in the name of ensuring a white majority remains in this country.

So what does Axios want you to “Be Smart” about when it comes to the president reversing a constitutional amendment passed in the wake of the Civil War?

It isn’t going to happen.

Be smart: Few immigration and constitutional scholars believe it is within the president’s power to change birthright citizenship.

So the smart thing—if we are all correctly interpreting the definition of the word “smart”— would be to synthesize the information, realize it’s out of the realm of possibility, that it’s only the president tossing a chunk of meat to his raving nationalist base, and move on. Or perhaps not give it much attention at all.

But, you see, not all scoops are alike. Some are also needed as promotional material for your brand new HBO show.

HBO and Axios are teaming up for a four-part documentary, and the show even made it into Swan’s lede.

President Trump plans to sign an executive order that would remove the right to citizenship for babies of non-citizens and unauthorized immigrants born on U.S. soil, he said yesterday in an exclusive interview for “Axios on HBO,” a new four-part documentary news series debuting on HBO this Sunday at 6:30 p.m. ET/PT.

The story included a clip of the interview.

If merely plugging its HBO special— generating buzz by way of promoting a xenophobic stance from the far-right wing of the Republican Party that you say has no ability to be implemented—was Axios’ only journalistic sin this morning, that would be enough.

But the site also demands, in its emails, that you think “big picture.” Which, in this case, should mean that we’re exactly one week away from the midterms, which Republicans are trying to turn into a frothing referendum on immigration.

In an interview with Laura Ingraham just last night, Trump continually hyped the immigrant caravan in Mexico, which is still a thousand miles away.

By allowing Trump to float the idea that he would singlehandedly amend the Constitution over our “ridiculous” concept of birthright and blasting it out in the biggest way possible, Axios and Swan played right into the White House’s hand.

Swan said he’d been tipped off by a source about Trump’s idea, without allowing any context for his source’s motivation.

One has to wonder what those were. Was it someone concerned about the president acting unilaterally against the Constitution? Or was it was most likely someone wanting to get this story in front of Republican voters in advance of an election (and from the way the president feigns surprise at Swan knowing about his intentions, it seems probable he wasn’t blindsided by this line of questioning)?

Axios even ran with Trump’s false statement from the teaser in the first version of its story, that the U.S. is the only country in the world where birthright citizenship exists.

After criticism, it was corrected, noting that over 30 countries have birthright citizenship in place.

Swan’s scoop—in the name of his new HBO show—was met with derision.

be smart: fact check the president after you publish your piece https://t.co/tuDnvCzJZ4

This is such an irresponsible tweet. No context. And really—we get it, you’re promo-ing your new tv show, and that’s why your reporter laughs thru the interview. Class A example if shitty journalism. https://t.co/TW3gawABcA

Watch the clip. @jonathanvswan leads Trump into the birthright citizenship answer he wants. I’m sure Trump wants to do it, but I’ve sat through a lot of interviews and I’m hard pressed to remember a reporter leading an interview subject more blatantly than Swan does here. https://t.co/d3wS3Laoh0