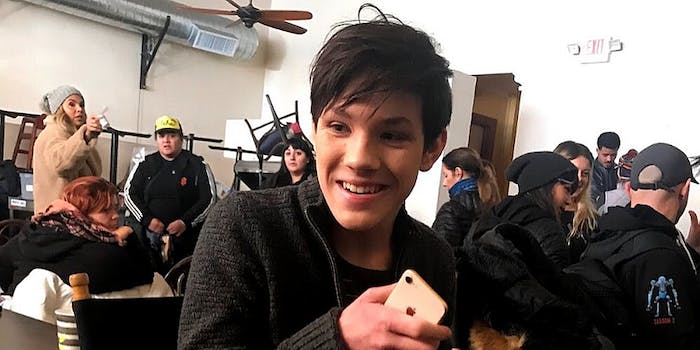 ‘He is NOT Native’: TikTokers accuse ‘Avatar’ actor Ian Ousley of lying about Cherokee heritage

Fan accounts and TikTokers are accusing Ian Ousley, an actor known most recently for his minor role on 13 Reasons Why, of faking his ethnicity in order to be cast on Netflix’s upcoming live-action version of Avatar: The Last Airbender.

Ousley’s management said the actor is indigenous, mixed-race, and “of the Cherokee tribe” when he was cast on the show, which showrunner Albert Kim calls “Asian and Indigenous characters as living, breathing people.” Ousley is set to play Sokka in the upcoming series.

But after a fan tried to verify Ousley’s ancestry, some fans of Avatar: The Last Airbender believe that Ousley is white. (Ousley did not immediately respond to the Daily Dot’s request for comment via Instagram direct message.)

@7genvoices, an ATLA fan account run by a group of mixed-race and Indigenous people, posted screenshots of correspondence another ATLA fan allegedly had with the Eastern Band of Cherokee Indians, the United Keetoowah Band of Cherokee Indians, and Cherokee Nation, the only three Cherokee tribes recognized by the federal government. Federal recognition is a result of acts of Congress, federal administrative procedures, and court decisions, and means a tribe has a “special trust relationship” with the U.S. government.

Furthermore, @7genvoices’ screenshots confirmed that Ousley is a member of Southern Cherokee Nation of Kentucky, which is a tribe that is not federally recognized. @7genvoices said it’s a “fake tribe.”

The Southern Cherokee Nation of Kentucky, which did not immediately respond to the Daily Dot’s request for comment, disputes claims about a historical lack of Cherokee presence in Kentucky on its website.

“For more than 200 years, American historians have argued that the Cherokee never lived in Kentucky,” reads the tribe’s website, which calls that argument, which the tribe says was coined by American author John Filson in his 1784 piece The Discovery, Settlement Present State of Kentucke, a “myth.” “Actually, many Nations of American Indians have lived in Kentucky since time immemorial.”

According to the Kentucky State Government, Cherokee people “are believed to have lived and hunted in what became Kentucky for hundreds of years before the first known white explorers made their way through the mountain passes.”

In a Twitter direct message, @7genvoices told the Daily Dot that they saw other ATLA fan accounts were suspicious of Ousley not being Cherokee, so they “begin verifying” that information.

“Folks that wanted to out this all in one place,” @7genvoices wrote. “Instead of a comment here a comment there that were just deleted and got blasted by [non-indigenous] folks.”

Another ATLA fan account, @AvatarNews_, which has over 35,000 followers on Twitter and 43,000 on Instagram, tweeted that they spoke with a friend of Ousley’s named Christabelle Marbun who denied that Ousley is white. (Marbun and Ousley follow each other on Instagram, and the Daily Dot has reached out to Marbun.)

“He isn’t white, he’s my friend and he’s native and asian. Don’t believe what you see on the internet,” Marbun commented on an Instagram post from @AvatarNews_. “I promise you he’s Native.”

Ousley liked @AvatarNews_’s tweet celebrating his casting on the show and stating his Native American and asian ethnicity.

“[Ousley] is a mixed-race, Native American and is a Cherokee tribe member,” says Ousley’s biography that was posted by Ousley’s manager (reposted by @AvatarNews_).

Following the controversy, some fans of ATLA expressed their disappointment with Ousley on Twitter and TikTok. Many tweets about the situation include the hashtag #removewhitesokka.

“He is NOT Native. Ian Ousley needs to give up his role of Sokka to someone Indigenous, specifically Yup’ik,” tweeted @bannockbumbitch, who identifies themselves as Indigenous. “I stand by this firmly.”

“As an Inuk I’m tired of non inuit & non indigenous [people] stealing roles from us & lying [about] it,” tweeted @kunsblush. “Meanwhile we are constantly getting death threats & being gaslit & yt [people] defending him just [because] we want proper representation.”

The question of Ousley’s ancestry potentially casts a shadow on the long-awaited Avatar project.

“ATLA is a story based on Indigenous and Asian culture and deals with themes like colorism and racism,” @sadgrlsummer wrote in the TikTok’s overlay text. “Having one of the main cast members lying about being a POC could have a big effect on the whole project.”

The Daily Dot reached out to Netflix.

Update 11:58pm CT, Feb. 2: This article has been updated to reflect that Twitter account @7genvoices made up of a group of mixed-race and Indigenous users.