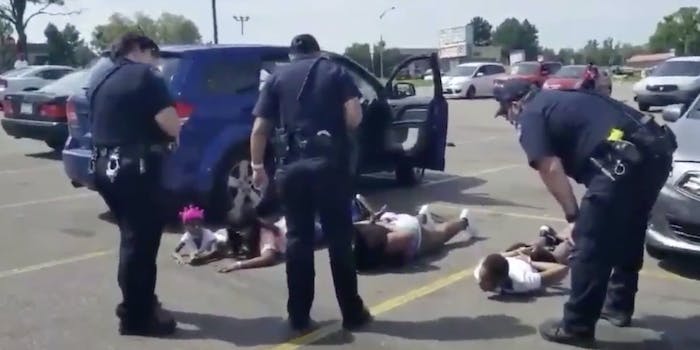 'There’s no excuse why you didn’t handle it a different type of way.'

An innocent Black family was stopped and handcuffed by police in Aurora, Colorado over a stolen motorcycle Sunday. Though police quickly realized the family was in no way connected to the theft, it wasn’t until after most of the family—including a 12-year-old child—had been cuffed face-down on the ground.

A video of the incident was posted to Facebook by Shaun King. Despite numerous controversies, King remains a prominent figure online. The video only shows a few minutes of the arrest, but it was enough to spark a firestorm online.

As the brief minute-and-a-half video begins, four people can be seen face-down on the pavement. Two people, including one very young child, are un-cuffed. The other two, both of whom are underage, have their hands handcuffed behind their backs. Five white police officers swarm around the group as one girl sobs, begging for her mother and sister.

Officers eventually helped the children off of their bellies. The video ends as officers assist all four into sitting positions, but they do not remove the handcuffs from either the 17-year-old or 12-year-old.

Police stopped the vehicle due to an avoidable mix-up. The family’s car had a Colorado license plate that apparently shared the same number as the Montana license plate of the stolen motorcycle. Police quickly realized their error, but it was too late.

The Aurora Police Department said in a statement to the Daily Dot that police had been trained to draw their weapons and to order people to lie on the ground when dealing with a suspected stolen vehicle. However, the department will now teach its officers to use their judgment.

“We must allow our officers to have discretion and to deviate from this process when different scenarios present themselves,” Wilson said in a statement. “I have called the family to apologize and to offer any help we can provide, especially for the children who may have been traumatized by yesterday’s events.”

Video of the incident quickly went viral online. Police in the area are already under harsh scrutiny after 23-year-old Elijah McClain died after cops arrested him last year. Soon after the video went viral, the internet at large had made up its mind: The Aurora PD needs a big change, and quick.

“There’s no excuse why you didn’t handle it a different type of way,” she told KUSA. “You could have even told them ‘step off to the side let me ask your mom or your auntie a few questions so we can get this cleared up.’ There was different ways to handle it.”

Update 9:42am CT, August 4: This story has been updated to include information from the Aurora Police Department.