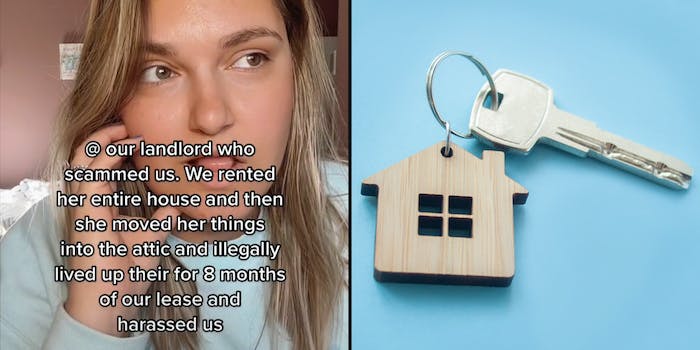 ‘She let the mortgage go unpaid and lived off our rent money’: A woman alleges her landlord illegally moved into her attic

'I would SNAP, glad you took her to court!'

A TikToker says she sued a landlord who scammed her by illegally living in the attic of the house that she rented.

Stefanie Murphy (@stefaniemurphy) posted the clip on Monday with the text overlay reading: “@ our landlord who scammed us. We rented her entire house and then she moved her things into the attic and illegally lived up [there] for 8 months of our lease and harassed us.”

Stefanie Murphy spoke to the Daily Dot and shared more details on her landlord drama.

Stefanie said he learned about this rental home from a former photography client of hers. “I remember even saying we lucked out with our landlord. She was older and told us she moving in with her boyfriend but didn’t want to sell her house just yet, which is why she was renting it out in the meantime. She told us she would be storing her larger furniture in the attic for the time being and that she may need to text us to come by if she needed something from up there. We said absolutely, no problem.”

Murphy explained that the illegal attic was furnished with a stove and everything, and the landlord was able to access it via a small staircase in the front of the house.

Stefanie explained that the landlord moved her stuff into the attic before she moved in, but suspiciously kept coming back. Apparently, the landlord didn’t even try to “hide it at all.”

“She would come and go for work, but was sleeping up there every single night. We had no idea what to do. Over the next 8 months, she harassed us daily. Between blocking our cars in the driveway, to texting us demanding we put lights on outside for her to get inside safely, she would tan out on the deck and pool.”

As for the court case, Murphy says she won. “She had to settle. We got back our security and half of utilities. Judge said we could take her back for all back rent but we dropped it.”

She alleges that the landlord was trying to “get more money in rent” by renting out the entire house rather than part of the house. Murphy claimed, “She let the mortgage go unpaid and lived off our rent money.”

In the comments, people applauded Murphy for how she handled the situation. “I would SNAP, glad you took her to court!”

“I get hard times lol but I’m bare minimum releasing bees and fart spray up there,” another commented.