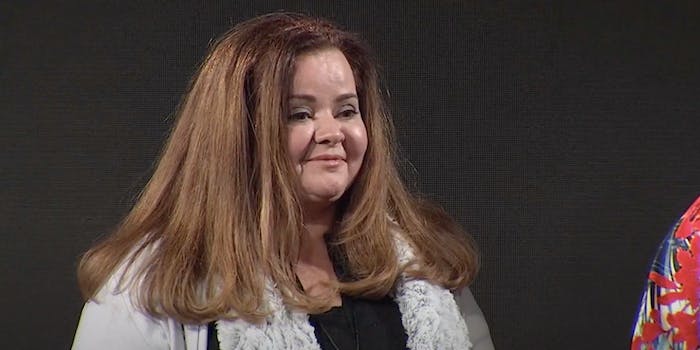 Last week, the scientific community mourned the death of one of their own. Followers of an account supposedly belonging to an anthropology professor at Arizona State University, @Sciencing_Bi, learned late in the week that its owner had died of coronavirus. Days later, it was revealed that every detail, from the account itself to the death, were fake.

The account, and all the tall tales it told, actually belonged to BethAnn McLaughlin, a neuroscientist and the founder of #MeTooSTEM.

The anonymous account has been gaining steam on Twitter for years. Since 2016, @Sciencing_Bi has been connecting with members of the scientific community and building a reputation as an experienced queer professor. Posts from the account often discussed topics like sexual harassment in science and the need for greater diversity.

By the time 2020 rolled around, accounts connected with @Sciencing_Bi felt like they knew the human behind it: A queer Hopi Native American anthropology professor who fled the southern U.S. for the more welcoming north. The account holder was vocal when it came to topics that concerned it, like the career of BethAnn McLaughlin.

The account promoted McLaughlin’s career over the years, even going so far as to advocate for her to gain tenure at Vanderbilt University. While the effort was ultimately unsuccessful, it cemented a connection between the two accounts.

Then, in April of this year, @Sciencing_Bi made a grim announcement: The person behind it had been diagnosed with COVID-19. The next few months saw the account detail a number of symptoms, including “a loss of language fluency,” according to BuzzFeed News.

ASU was immediately in @Sciencing_Bi’s crosshairs. The account blamed the university for their diagnosis. A June tweet claimed that the school “forced me to teach 200 person lectures instead of closing the school in April.” It also accused the university of cutting her salary by 15 percent while she was sick in the hospital.

Then, after a supposedly lengthy battle with coronavirus, @Sciencing_Bi’s death was announced on July 31. McLaughlin broke the entirely fake news on her own account in a lengthy, heartfelt thread. “Looking at her side of the bed and crying. Just a lot of crying. I literally can do nothing,” she wrote, according to New York Post.

The announcement sparked an immediate reaction across the scientific community. Many supposed peers posted their condolences, while others reacted in anger. They went after ASU for its alleged role in @Sciencing_Bi’s death, and for what the account claimed were extremely lax precautions.

“@Sciencing_Bi is a Native American anthropology professor who first contracted #COVID19 April 11, likely from her college forcing her to teach well after the virus had established itself at her college,” one peer posted to Facebook. The sentiment was shared across social media.

That’s when everything started to fall apart. Rumors began swirling that the account might be a catfish belonging to McLaughlin. Her muddied history within the community quickly became a topic of conversation as people began connecting the dots. As more and more people began questioning the story, both @Sciencing_Bi and McLaughlin’s main account switched to private. Soon after, they were both suspended by Twitter.

On Sunday, the same day the accounts were suspended, an ASU spokesperson came forward to place the final nail in McLaughlin’s coffin. The spokesperson, Katie Paquet, described the account as a hoax and explained that all information posted about the school was false. ASU reportedly closed its campus in March and initiated no salary cuts whatsoever.

“We have been looking into this for the last 24 hours and cannot verify any connection with the university,” Paquet told BuzzFeed News. “We have been in touch with several deans and faculty members and no one can identify the account or who might be behind it. We also have had no one, such as a family member or friend, report a death to anyone at the university,” she added.

McLaughlin finally admitted that the account was fake in a statement issued through her lawyer to the New York Times.

“I take full responsibility for my involvement in creating the @sciencing_bi Twitter account. My actions are inexcusable,” she said. “I apologize without reservation to all the people I hurt.”