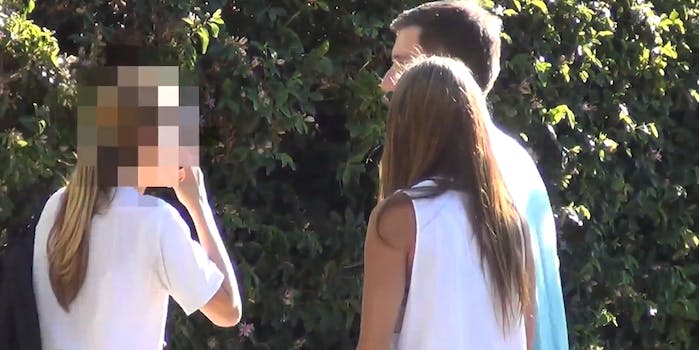 You'd think this would be easier.

Previously, whatever has brought us popular videos about propositioning people on the street for sex—with both men and women—but always in a one-on-one scenario. This time, an attractive pair posed as a couple interested in bringing a third (or fourth, or fifth party) into the bedroom.

Women tend to reject the proposal out of hand, often in disbelief. Men hem and haw a bit more but still err on the side of abstinence. “No thanks” and “I’m good” are some common polite responses from both genders. A good handful of dudes are more than game, however, and follow wherever the experimenters lead. One even held the other guy’s hand.

The clear highlight, however, has to be the 86-year-old man who, when he finally hears what the young couple is interested in, blows them off with an ice-cold burn: “I’ve had more than threesomes,” he scoffs, walking away.

“Asking For Threesomes,” like other whatever channel montages in this vein, carries the disclaimer that neither participant in the gag actually had sex with anyone depicted, which must have made for some disappointment among the more willing guinea pigs. You can watch additional great encounters—and the crushing reveals—in a supplementary video.

So let that be a lesson to you: If a cute person approaches you on the street about fulfilling their sexual fantasy, it’s likely just for a reaction. Serious people would be using Craigslist.